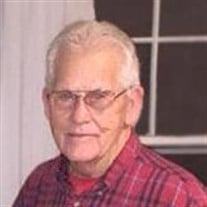 Lee Hendrex Barrett, 77, of Troy, Missouri, passed away peacefully surrounded by his family on Tuesday, October 30, 2018 at his residence in Troy, Missouri. He was born on January 19, 1941 in Lowndes, Missouri and was the son of the late Harry and Naoma (Hopkins) Barrett. Lee was united in marriage to Martha Smithmier on March 29, 1963 in St. Louis, Missouri and she preceded him in death on July 31, 1970. He then later married Christine Eckstein on June 29, 1973 in Florissant, Missouri. Lee graduated from Beaumont High School in 1959 and entered the United States Army where he was later honorably discharged in 1965. He worked as a Police Chief for many years, including as a lieutenant at Lake Saint Louis, MO and chief of police for Vandalia, MO. Lee retired after 22 years of dedication from the State of Missouri as a Child Support Enforcement Officer. He was a tinker and had a knack for fixing broken things. Lee loved spending time with his family camping and making the trips to Mark Twain Lake. He was the guy you asked to gut check big decisions, and the fellow you could sit amiable with in silence and look at the weather or the yard. Lee was an outdoors enthusiast who liked gardening and fishing. He is survived by his loving wife of 45 years, Christine Barrett of Troy, MO; three daughters and one son: Jana Barrett of Wentzville, MO, Grant Barrett and wife Sarah of San Diego, CA, Stacey Hunter of FL and Leslie Davis and husband Chris of Wentzville, MO; one sister, Josephine Marler of Silva, MO; six grandchildren: Madison, Owen, Guthrie, Mason, Truman and Logan; nieces, nephews, cousins and friends. He was preceded in death by his parents, one son, Gregory Barrett, siblings: Wilma Whitworth, Don Barrett, Janice Golden and Eldon Barret. Friends will be received from 11:00 a.m. to 2:00 p.m. on Sunday, November 4, 2018 at KEMPER-MILLARD-KEIM Family Funeral Chapel, located at 351 Monroe Street Troy, MO 63379. Funeral service will follow at 2:00 p.m. on Sunday, November 4, 2018 at the Troy Chapel. Internment will be held with full military honors at the Cowan Cemetery in Lowndes, Missouri. In lieu of flowers expressions of sympathy may be made to the Charity of Donor’s Choice, American Heart Association, American Cancer Society, American Diabetes Association or Alzheimer’s Association, in care of KEMPER-MILLARD-KEIM Family Funeral Chapel, P.O. Box 222 Troy, MO 63379. Arrangements are under the direction of KEMPER-MILLARD-KEIM Family Funeral Chapel; 351 Monroe Street Troy, MO 63379. Online condolences may be made at www.kempermillardkeimfamilyfuneralchapel.com Phone 636-528-8221

Lee Hendrex Barrett, 77, of Troy, Missouri, passed away peacefully surrounded by his family on Tuesday, October 30, 2018 at his residence in Troy, Missouri. He was born on January 19, 1941 in Lowndes, Missouri and was the son of the late Harry... View Obituary & Service Information

The family of Lee Hendrex Barrett created this Life Tributes page to make it easy to share your memories.

Send flowers to the Barrett family.