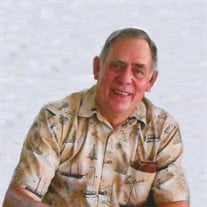 Lester Dale Witt, 82, of Troy, Missouri, passed away peacefully on Thursday, October 5, 2017 with family and friends at the SSM Health St. Joseph Hospital in Lake Saint Louis, Missouri. He was born on June 26, 1935 in Dawson, West Virginia, a son of the late Lester John and Irene Zula (McClung) Witt. Lester was united in marriage to Jenny Johnson on August 25, 1961 at the Kingsland Presbyterian Church and too this union one son was born. Lester decided to serve his county and enlisted in the United States Navy on October 19, 1954, while serving his county he worked as an Airplane Mechanic and was honorably discharged on October 1, 1958. After the Navy, he then continued his education at Ranken Trade School for two years. He worked for many years for United Parcel Service as a mechanic. Lester and Jenny enjoyed square dancing and making memories together. In his earlier years he liked hunting, fishing and had a true passion for working on vehicles. Lester loved spending time at the Lincoln County Veteran’s Coffee Talk and truly valued the friendships he gained along the way. He was an active member of the Troy Presbyterian Church in Troy, MO. Lester is survived by his loving wife of 56 years, Jenny Witt of Troy, MO; one son, Charles Witt and wife Angela of O’Fallon, MO; one granddaughter, Oliva LeeAnn Witt; siblings: Buddie Witt (Edna), Carol Westcott (Clarence) and Merrell Witt (Donna); one sister-in-law, Sandra Manley, numerous relatives and his adopted family at Lincoln County Veterans Coffee Talk. He was preceded in death by his parents and one infant son, John Allen Witt. Friends will be received from 11:00 a.m. to 2:00 p.m. on Thursday, October 12, 2017 at KEMPER-MILLARD-KEIM Family Funeral Chapel located at 351 Monroe Street Troy, MO 63379. Funeral service will follow at 2:00 p.m. on Thursday, October 12, 2017 at the KEMPER-MILLARD-KEIM Family Funeral Chapel in Troy, MO. Interment will be held at the Troy City Cemetery, with full military honors. In lieu of flowers, expressions of sympathy may be made to the Lincoln County Veterans Coffee Talk, in care of KEMPER-MILLARD-KEIM Family Funeral Chapel, P.O. Box 222 Troy, MO 63379. Arrangements are under the direction of KEMPER-MILLARD-KEIM Family Funeral Chapel; 351 Monroe Street Troy, MO 63379. Online condolences may be made at www.kempermillardkeimfamilyfuneralchapel.com Phone 636-528-8221

The family of Lester Dale Witt created this Life Tributes page to make it easy to share your memories.