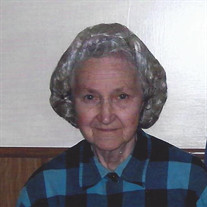 Levera Ann Stanek, 93, of Hawk Point, Missouri passed away peacefully on the family farm surrounded by her family on Sunday, September 9, 2018 at the farm in Hawk Point, Missouri. She was born on June 11, 1925 in Hawk Point, Missouri and was the daughter of the late Joe and Lucy (Broz) Vejvoda. Levera was united in marriage to Albert Stanek on August 7, 1948 at the St. Mary’s Catholic Church in Hawk Point, Missouri and he preceded her in death on April 24, 2017. To this union one daughter was born. Levera was born and raised in Lincoln County and attended the Hawk Point School. She spent several years in St. Louis, living with her sister and working as a waitress and later a factory worker. Levera always considered Hawk Point her home and came back to live on the farm as a housewife and mother to their daughter, June (Stanek) Henebry. She was a member of the St. Mary’s Catholic Church and Altar Sodality. Levera enjoyed quilting and keeping a garden. She is survived by her loving daughter, June Henebry and husband Don of Hawk Point; one sister-in-law, Dolores Vejvoda of Hawk Point; nieces, nephews, cousins and many friends. She was preceded in death by her husband, Albert Stanek; parents, Joe and Lucy Vejvoda; three brothers and sisters-in-law: Joe Vejvoda (Helen), Frank Vejvoda (Eloise) and William “Vanny” Vejvoda; one sister and brother-in-law: Matilda Schneider (Edward); A memorial mass will be held at 10:00 a.m. on Saturday, September 22, 2018 at St. Mary’s Catholic Church, located at 458 Main Street Hawk Point, MO 63349. A private interment will be held at a later date. In lieu of flowers expressions of sympathy may be made to the St. Mary’s Catholic Cemetery or Masses, in care of KEMPER-MILLARD-KEIM Family Funeral Chapel, P.O. Box 222 Troy, MO 63379. Arrangements are under the direction of KEMPER-MILLARD-KEIM Family Funeral Chapel; 41 Farm Lane Hawk Point, MO 63349. Online condolences may be made at www.kempermillardkeimfamilyfuneralchapel.com Phone 636-338-4375

The family of Levera Ann Stanek created this Life Tributes page to make it easy to share your memories.

Send flowers to the Stanek family.