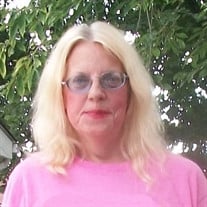 Linda Maria Menner, 64, of Silex, Missouri, passed away on Sunday, September 28, 2014 at Silex Community Care Center in Silex, Missouri. She was born on August 8, 1950 in St. Louis, Missouri the daughter of Joseph and Lavern (Capstick) Menner. Linda graduated from McCluer High School in 1968. She was a homemaker and taking care of her family was her top priority. In her earlier years she enjoyed cooking and desserts was her specialty. Linda liked to take her chances and play scratch off tickets, with the hopes of winning big. She always had a smile on her face and loved everyone. Linda loved spending time with her friends and family. She is survived by her one daughter, Holly Beeman and significant other, Lou Miller of Wright City, Missouri; one grandson, Michael Trembley of Wright City, Missouri; three brothers, four sisters, nieces, nephews, cousins and friends. She was preceded in death by her parents, one sister and one brother. Friends will be received from 10:00 a.m. to 12:00 p.m. on Wednesday, October 1, 2014 at KEMPER-MILLARD-KEIM Family Funeral Home / Troy Chapel. Funeral services will be held at 12:00 p.m. on Wednesday, October 1, 2014 at the Chapel. Officiating the service will be Father Chuck Tichacek. Interment will be held at Wright City Cemetery. Expressions of sympathy may be made to the Silex Community Care Center. In care of Kemper-Millard-Keim Family Funeral Chapel; P.O. Box 222, Troy, MO 63379. Online condolences may be made at www.kempermillardkeimfamilychapels.com Ph.(636) 528-8221

The family of Linda Maria Menner created this Life Tributes page to make it easy to share your memories.

Linda Maria Menner, 64, of Silex, Missouri, passed away on Sunday,...

Send flowers to the Menner family.