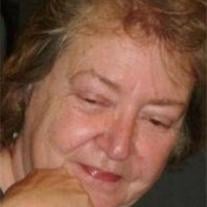 Lola Mae Gillman, 66, of Hawk Point, Missouri, passed away on February 9, 2014 at her residence in Hawk Point, Missouri. She was born on March 8, 1947 in St. Louis, Missouri, the daughter of the late William and Belva (Warren) McRoberts. Lola attended Jennings High School and in her earlier years she loved to fish and camp with her family. She moved to Hawk Point in May of 2008 to be closer to her son and grandchildren. Lola enjoyed quilting and had a passion for cake decorating, which was passed onto her daughter. She baked many cakes in her life, several of which were for her grandchildren’s birthdays. She will be deeply missed by those who knew and loved her. She is survived by her children, Barbara Gillman (Tom Grissom) of Luray, Tennessee, Kimberlain Gillman III (Denise Baumgartner) of Hawk Point, Missouri and Carrie Gillman (Dave Trachsel) of Arnold, Missouri; siblings, Bill McRoberts, Bruce McRoberts and Tina McRoberts; one sister-in-law, Peggy Gruettemeyer; former husbands, Kimberlain F. Gillman Jr. and John E. Sloan; five grandchildren, Brandon Gillman, Kelsey Grissom, Brent Gillman, Brenden “Mikie” Gillman and Brittney Gillman; nieces, nephews, cousins and friends. She was preceded in death by her parents, one son, Timothy Gillman in 2008, one brother, Bryon McRoberts and sister, Jan Bishop. Funeral service will be held at 1:00 p.m. on Saturday, February 22, 2014 at the Hawk Point Baptist Church (220 Main Street, Hawk Point, MO 63349). At the conclusion of the service, friends will be received until 4:00 p.m. at the Hawk Point Baptist Church. Arrangements are under the direction of Kemper-Marsh-Millard Family Funeral Chapels, P.O. Box 222 Troy, MO 63379. Online condolences may be made at www.kempermarshmillardfamilychapels.com ph. (636) 528-8221.

The family of Lola Gillman created this Life Tributes page to make it easy to share your memories.

Lola Mae Gillman, 66, of Hawk Point, Missouri, passed away on...

Send flowers to the Gillman family.