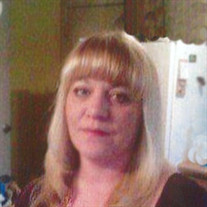 Lonna Sadler, 55, of Troy, Missouri, passed away on Sunday, February 19, 2017 in at her residence in Troy, Missouri. She was born on October 7, 1961 in Troy, Missouri, a daughter of the late Lonnie E. and Joyce M. (Melton) Brawley. Lonna was united in marriage to Larry Sadler on November 25, 1995 in St. Charles, Missouri. In Lonna’s earlier years she worked as a manger for various business and recently an attendant for Parkside Mini Mart in Troy. She enjoyed playing bunko, crocheting, raising her children and chasing her grandchildren and great-grandchildren. Lonna cherished every minute she spent with Larry, especially when they would go dancing and to the Amerstar Casino. She was a very colorful person who knew how to bring a smile on your face. She is survived by her husband, Larry Sadler of Troy; two sons and two daughters: Steven Ray Vaughn of Troy, Lonni Blei (Jared)of St. Peters, Abigail Sadler of Troy and Devon Sadler of Troy; step-children: James Sadler (Tracy) of Troy, Larry Sadler, Jr. of St. Peters, Tina Cederberg (Tom) of Phenoix, AZ; siblings: Lonnie Brawley, Jr. of Troy, Ronna Lagemann (Gary) of Hawk Point, Bonnie Pyle (John) of Troy, Ronnie Brawley (Paula) of Wentzville and Jodie Brawley (Stacey) of Silex; twelve grandchildren, six great-grandchildren, aunts, uncles, nieces, nephews and friends. She was preceded in death by her parents, maternal grandparents, paternal grandparents, one aunt, one uncle and one nephew. Friends will be received from 1:00 p.m. to 3:00 p.m. on Saturday, February 25, 2017 at KEMPER-MILLARD-KEIM Family Funeral Chapel located at 351 Monroe Street Troy, MO 63379. Funeral service will be held at 3:00 p.m. on Saturday at the KEMPER-MILLARD-KEIM Family Funeral Chapel in Troy, MO. Interment will be held at the Pleasant Hill Cemetery in Ellington, Missouri. Expressions of sympathy may be made to The Family of Lonna Sadler in care of KEMPER-MILLARD-KEIM Family Funeral Chapel, P.O. Box 222 Troy, MO 63379. Arrangements are under the direction of KEMPER-MILLARD-KEIM Family Funeral Chapel; 351 Monroe Street Troy, MO 63379. Online condolences may be made at www.kempermillardkeimfamilyfuneralchapel.com Phone 636-528-8221

The family of Lonna Sadler created this Life Tributes page to make it easy to share your memories.

Lonna Sadler, 55, of Troy, Missouri, passed away on Sunday, February...

Send flowers to the Sadler family.