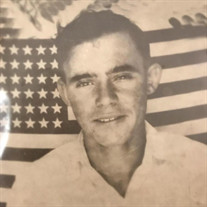 Lonnie Smithey, Sr., 94, of Hawk Point, Missouri, passed away on Wednesday, September 8, 2021 at Warrenton Manor in Warrenton, Missouri. He was born on January 29, 1926 Tyronza, Arkansas and was the son of Dave Edward and Alberta “Berty” (Davis) Smithey. He was united in marriage to Darlies Miller on March 11, 1945 in Marion, Arkansas. To this union six children were born. Lonnie served his country in the United State Army from 1946 to 1947. In his earlier years he worked as a farmer in Arkansas. Darlies and Lonnie moved to Missouri in 1950. Lonnie retired from Schluter Manufacturer after over 31 years of dedication. He was always busy and took pride in his yard. Lonnie liked gardening and continuously mowing his yard. His family was his world and he enjoyed every minute spent with them. He is survived by his children: Lonnie Smithey, Jr. (Jackie) of Leslie, MO, Mary Stallard (Ray) of Elgin, TX, Ronald Smithey (LeAnne) of Hawk Point and Donald Smithey (Linda) of Hawk Point, MO; one brother, Roy Smithey (Joy) of Jonesboro, AR; fifteen grandchildren, twenty-eight great grandchildren, sixteen great-great-grandchildren, nieces, nephews, cousins and friends. He was preceded in death by his parents, his wife, Darlies Smithey, two daughters: JoAn Spradling and Doris Ellington, eleven brothers and sisters, one son-in-law, Rick Ellington. Family and friends will be received from 2:00 p.m. to 5:00 p.m. on Sunday, September 12, 2021 at KEMPER-KEIM Family Funeral Chapel located at 41 Farm Lane Hawk Point, MO 63349. Funeral service will be held at 12:00 p.m. on Monday, September 13, 2021 at the KEMPER-KEIM Family Funeral Chapel located at 41 Farm Lane Hawk Point, MO 63349. Interment will be held at the Hawk Point City Cemetery. In lieu of flowers expressions of sympathy may be made to American Cancer Society Church in care of Kemper- Keim Family Funeral Chapel P.O. Box 222 Troy, MO 63379. Arrangements are under the direction of Kemper- Keim Family Funeral Chapel; 41 Farm Lane Hawk Point, MO 63349. Online condolences may be made at www.kemperkeimfamilyfuneralchapel.com Phone 636-338-4375.

The family of Lonnie Smithey Sr. created this Life Tributes page to make it easy to share your memories.

Send flowers to the Smithey family.