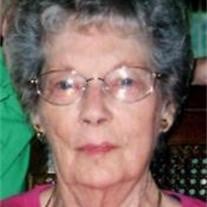 Mabel Hutt Lake, 96, of Troy, Missouri, passed away at 8:50 p.m., Saturday evening, February 16, 2013 at Lincoln County Nursing and Rehab Center, Troy, Missouri. She had been in failing health since falling in her home in December, 2010. Mabel was born in Troy on October 2, 1916 to John and Lena (Jenkins) Hutt. She lived in Troy her entire life. She married Ray Lake on October 23, 1963 becoming the “First Lady” of Troy while Ray served as Mayor for many years. She graduated from Buchanan High School in 1934 and was employed as the payroll clerk at the Gossard Garment factory before her marriage. She enjoyed league bowling; was a member of the Evangeline Club and the First Christian Church. Mabel was of gentle spirit with a positive attitude always. She was an excellent partner to Ray, taking good care of him after he lost his eyesight. Those preceding Mabel in death were: her husband, Ray Lake; her parents; three sisters, Margaret Hutt, Marge Emerson and Elizabeth Pearson; three brothers, Robert Hutt, William Hutt and James Hutt; and one nephew, Skip Pearson. Mabel is survived by: her nephew, Kell Emerson of Vining, Montana; two great-nieces, Beth Perre’t , her husband, Steve and children, Alex and Elizabeth, all of Jefferson City, Missouri and Ann Tuckley, her husband, Paul and son William of Columbia, Missouri. She is also survived by special care-giver, Richard Chumney and his wife, Linda of Troy and by Ray’s daughter, Joyce Lake of Boonville, Missouri. Friends will be received from 10:00 a.m. to 11:00 a.m. on Tuesday, February 19, 2013 at Kemper-Marsh-Millard Family Funeral Home/ Troy Chapel. Funeral services will be held at 11:00 a.m., Tuesday, February 19, 2013 at the chapel. Interment will be in the Troy City Cemetery, Troy, Missouri. Expressions of sympathy may be made to AmHeart Hospice, First Christian Church or Bread for Life Food Pantry. Arrangements under the direction of Kemper-Marsh-Millard Family Funeral Chapel; 351 Monroe St. Troy, MO 63379. Online condolences may be made at www.kempermarshmillardfamilychapels.com Ph.(636) 528-8221

Mabel Hutt Lake, 96, of Troy, Missouri, passed away at 8:50 p.m., Saturday evening, February 16, 2013 at Lincoln County Nursing and Rehab Center, Troy, Missouri. She had been in failing health since falling in her home in December, 2010. Mabel... View Obituary & Service Information

The family of Mabel Lake created this Life Tributes page to make it easy to share your memories.

Send flowers to the Lake family.