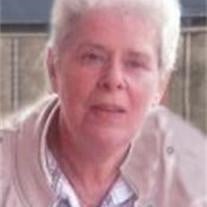 Margaret Jean Cole, 69, of Troy, passed away surrounded by her family, at Barnes Jewish Hospital in St. Louis, Missouri, on Sunday, February 3, 2013. She was born on May 21, 1943, in Houghton, England; a daughter of Laurence and Nora Jones. She was married to Clifford Cole on April 23, 1982, in Troy, Missouri, who preceded her in death on September 7, 2012. Margaret received her education through the schools in England. She was very proud of her degree in nursing and spent her early years as an R.N. Margaret traveled to the United States from England when she was the age of 19. She was a 27 year employee of The Kroger Company retiring in 2003. She became a member of the Troy Lions Club in 2008 and was a hardworking member, chairing the Trivia Night and Silent Auction from 2011-2013. In her free time, she enjoyed scrapbooking, gardening, especially her flowers, needlework, sewing, and watching humming birds. Her children and grandchildren were very special to her and held a special place in her heart. She was a very strong, loving, caring, and compassionate woman who would do anything for anyone and will be greatly missed. Margaret is survived by her three children: Karl E. Dooley and wife, Debby of Midwest City, Oklahoma; Sandra L. Jobe and husband, Jim of Winfield, Missouri; and Lynelle C. Smith and husband, Jeff of Troy, Missouri. When she and Cliff were married, she gained four children: James A. Cole and wife, Cheryl of Truxton, Missouri; Jeffrey S. Cole and wife, Lisa of Tipton, Indiana; Kenneth W. Cole of Barrow, Virginia; Carla C. Kinser and husband, Tim of Brownsville, Kentucky; her mother: Nora Jones of Houghton, England; one brother: Mick Jones and wife, Carol of St. Ives, England; one sister: Jean Armstrong of Sydney, Australia. She was preceded her in death by her father and husband. Friends will be received from 4:00 p.m. to 8:00 p.m. on Wednesday, February 6, 2013, at KEMPER-MARSH-MILLARD Family Funeral Home / Troy Chapel. Funeral services will be held at 11:00 a.m. on Thursday, February 7, 2013, at Asbury United Methodist Church in Foley, Missouri. Interment will be held in Asbury Cemetery. Expressions of sympathy may be made to Siteman Cancer Center or American Heart Association. Arrangements are under the direction of Kemper-Marsh-Millard Family Funeral Chapel; P. O. Box 222, Troy MO. Online condolences may be made at www.kempermarshmillardfamilychapels.com Ph.(636) 528-8221

Margaret Jean Cole, 69, of Troy, passed away surrounded by her family, at Barnes Jewish Hospital in St. Louis, Missouri, on Sunday, February 3, 2013. She was born on May 21, 1943, in Houghton, England; a daughter of Laurence and Nora Jones.... View Obituary & Service Information

The family of Margaret Cole created this Life Tributes page to make it easy to share your memories.

Margaret Jean Cole, 69, of Troy, passed away surrounded by her...

Send flowers to the Cole family.