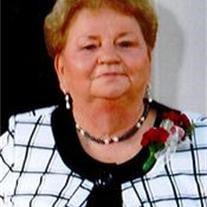 Martha LeJane Hughes, 72, passed away on Friday, July 13, 2012 at her residence in Troy, Missouri. She was born on August 15, 1939 in Salisbury, Missouri, a daughter of the late Thomas Jefferson and Mary Ruth Kitchen (Moss). She was united in marriage to James Donald Hughes on August 25, 1957 at the Clifton Hill Baptist Church. To this union three children were born. Martha attended grade school at Clifton Hill and graduated from Moberly High School in 1957. She was employed by Monsanto for 20 years, retired from MEMC and became a homemaker. Martha was a member of the First Baptist Church in Troy, since 1990 and was a key person in helping start the Ridge Road Baptist Church. She enjoyed crocheting, quilting, block quilting, tending her rose garden and canning, especially green beans for her grandchildren and great-grandchildren. She was a very loving, caring person and loved her children, grandchildren and great-grandchildren. She is survived by her loving husband of 54 years, James Donald Hughes of Troy, Missouri; two children: Molly Kientzy of Troy, Missouri and Gerald Hughes and wife Belinda of Paducah, Kentucky; three grandchildren: Jessica Baugh (Dan) of Troy, Missouri, Jennifer Frost (Mark) of Wright City, Missouri and Austin Hughes of Paducah, Kentucky; one brother, Tom Kitchen of Moberly, Missouri; one sister, Mary Dawson (Charles) of Sturgeon, Missouri; three great-grandsons: Carson and Carter Baugh and Hunter Frost; many nieces, nephews and friends. She was preceded in death by her son George Hughes in 1978, one niece, one nephew, one brother-in-law and one sister-in-law. Family and Friends will be received from 4:00 p.m. to 8:00 p.m. Tuesday, July 17, 2012 at KEMPER-MARSH-MILLARD Family Funeral Home / Troy Chapel. Funeral service will be held at 11:00 a.m. on Wednesday, July 18, 2012 at KEMPER-MARSH-MILLARD Family Funeral Home / Troy Chapel. Interment will be held at Troy City Cemetery. Officiating the service will be Pastor Gary Berry. Expressions of sympathy may be made to PALS or Epilepsy Fund. In care of Kemper-Marsh-Millard Family Funeral Chapel; P.O. Box 222, Troy, MO 63379. Online condolences may be made at www.millardfamilychapels.com Ph.(636) 528-8221

Martha LeJane Hughes, 72, passed away on Friday, July 13, 2012 at her residence in Troy, Missouri. She was born on August 15, 1939 in Salisbury, Missouri, a daughter of the late Thomas Jefferson and Mary Ruth Kitchen (Moss). She was united in... View Obituary & Service Information

The family of Martha Hughes created this Life Tributes page to make it easy to share your memories.

Send flowers to the Hughes family.