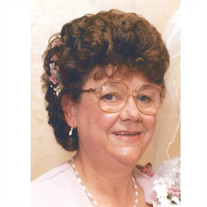 Mary Margaret Howell, 82, of Troy, Missouri, passed away on Monday, June 15, 2015 at her residence surrounded by her family. She was born on October 18, 1932 in St. Louis, daughter of the late George J. and Nora Kahrhoff. On October 2, 1954, she married Donald Wayne Howell, Sr. and he preceded her in death on February 27, 2009. To their union four children were born. Mary was a loving mother to Donald Howell, Jr., Michael Howell, Patrick Howell (Michelle), Margaret “Peggy” Hutsler (Jeff); six grandchildren, Ryan Howell (Sarah), Cathleen “Catie” Bowman (Jason), Bradley Howell, Shannon Roentved (Cole), Jeffrey Hutsler and Emily Hutsler; three great-grandchildren, Ayden, Riley and Harper; sisters, Grace Reinisch (Rich) and Janet Kemmerling (Larry); sisters-in-law and brothers-in-law Carol Kahrhoff, Jean Howell, H. Louise Howell, Marilyn Johannesman (Bob) and Barbara Ormsby (Harold). She was preceded in death by her parents, brother, John George Kahrhoff, mother-in-law and father-in-law, Lester and Viola Howell, and brother-in-law, Les Howell. Mary was the matriarch of the family. She was a devoted wife, mother, grandmother, sister and friend to many. She was a homemaker and always busy taking care of her husband and children’s needs. Mary enjoyed gardening, singing, cooking and planning the family functions. She loved keeping the family close even if there were many miles between them. Mary was always there to help others. She was a woman of true strength, with a heart of gold and was deeply loved and will always be with her family forever. Family and friends will be received from 4:00 p.m. to 8:00 p.m. on Thursday, June 18, 2015 at KEMPER-MILLARD-KEIM FAMILY FUNERAL HOME/TROY CHAPEL. Funeral mass will be held at 10:00 a.m. on Friday, June 19, 2015 at Sacred Heart Catholic Church located at 100 Thompson Drive in Troy, MO 63379. Expressions of sympathy may be made to American Cancer Society in care of the funeral home. Arrangements are under the direction of Kemper-Millard-Keim Funeral Chapel, P.O. Box 222 Troy, MO. 63379 www.kempermillardkeimfamilychapels.com (636) 528-8221

The family of Mary M. Howell created this Life Tributes page to make it easy to share your memories.

Mary Margaret Howell, 82, of Troy, Missouri, passed away on Monday,...

Send flowers to the Howell family.