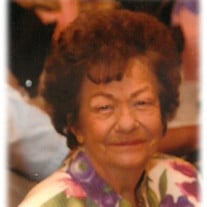 Mary “Eloise” (Nassar) Hurt 89, fortified with the Sacraments of the Holy Catholic Church, passed away on Saturday December 21, 2019 surrounded by her loving family on the family farm near Silex, Missouri. Eloise was born October 4, 1930 in Corso, Missouri, the daughter of the late Andrew Nassar and Genevieve Mudd. She met the love of her life at a country dance hall in Olney, and later was united in marriage to Joseph Hurt on May 26, 1956 at St. Mark’s Catholic Church. To this union six children were born. Eloise was the oldest of two siblings: Florence Crockett and George “Sonny” Nassar. She graduated from St. Mark’s Catholic High School in 1948 and later went to work at Wagner Electric, until marriage when she became a homemaker. Eloise was a farmer’s wife putting in many hours helping her husband, Joe with the daily farm chores. She enjoyed growing a large garden where she liked to can most of her produce: green beans, corn, tomatoes just to name a few. She was an excellent cook always had a home cooked meal served on the table, but you never knew what she had for dessert, pies or cakes. She was a caring mother to her six children: Rick, Karen, Terry, Jim, Mary Jo and Cynthia. She enjoyed being outside working in her yard, garden, and hosting family. But most importantly she loved watching her children and grandchildren grow and was proud of each of them. Eloise had a strong Catholic Faith and was a member of the St. Alphonsus Catholic Church. She had such a big heart that left an impact on all she met, she will be deeply missed. She is survived by her husband, Joe Hurt of Silex, MO; four children: Karen Hurt of Maryland Heights, MO, Jim “Crew” Hurt and wife Janis of Silex, MO, Mary Jo Hurt of Silex, MO and Cynthia Adams and husband Larry of Silex, MO; grandchildren: Jennifer Summers (Robby), Jimmy Hurt, Josh Adams, Jake Adams, Jordan Hurt, and Jaclyn Adams; 2 great-grandchildren: Tyler and Madison Summers; her brother and sister: George “Sonny” Nassar of Cottonwood, AZ and Florence Crockett of St. Charles, MO; sister in law, Gen Henebry of Hawk Point, MO; nieces, nephews, cousins and friends. She was proceeded in death by her parents, Genevieve Mudd, Andrew and Florence Nassar, one son, Rick Hurt, one daughter, Terry Hurt-Mudd, brothers-in-law and sisters-in-laws. Family and friends will be received from 12:00 p.m. to 3:00 p.m. on Friday, December 27, 2019 at St. Alphonsus Catholic Church located at 29 St. Alphonsus Road Silex, MO 63377. Funeral mass will be held at 3:00 p.m. at St. Alphonsus Catholic Church in Silex. Officiating the mass will be Father Chuck Tichacek. Interment will be held at St. Alphonsus Catholic Cemetery in Silex. Serving as pallbearers are Jennifer Summers, Jimmy Hurt, Josh Adams, Jake Adams, Jordan Hurt, and Jaclyn Adams. Expressions of sympathy may be made to St. Alphonsus Catholic School or Masses, in care of Kemper-Millard-Keim Family Funeral Chapel P.O. Box 222 Troy, MO 63379. Arrangements are under the direction of Kemper-Millard-Keim Family Funeral Chapel; 351 Monroe Street, Troy, Missouri 63379. Online condolences may be made at www.kempermillardkeimfamilyfuneralchapel.com Phone 636-528-8221

Mary &#8220;Eloise&#8221; (Nassar) Hurt 89, fortified with the Sacraments of the Holy Catholic Church, passed away on Saturday December 21, 2019 surrounded by her loving family on the family farm near Silex, Missouri. Eloise was born October... View Obituary & Service Information

The family of Mary "Eloise" Hurt created this Life Tributes page to make it easy to share your memories.

Send flowers to the Hurt family.