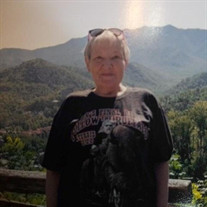 Melissa “Missy” Ann Summers, 64, of Troy, Missouri, passed away on Wednesday, April 21, 2021 surrounded by her family at her residence in Troy, Missouri. She was born on August 20, 1956 in St. Louis, Missouri and the daughter of the late Chester and Ruth (Ponder) Parrish. She was united in marriage to Wayne Summers on December 27, 1975 in Troy, Missouri. Missy graduated from Fort Zumwalt High School in 1974. She was primarily a homemaker, in her earlier years she worked as an office assistant for a Doctor’s Office and Auto Auction in St. Louis, Missouri. Missy was previously a member of the Moscow Mills Lions Club. Her family was her world, she took pride in caring for Wayne, her children and her grandchildren. She is survived by her loving husband, Wayne Summers of Troy, Missouri; sons: Matthew Summers and wife Heather of Wentzville, MO and Benjamin Summers and Sam Bruce of Troy, MO; grandchildren: Noah, Ezra and Rory Summers and Donnovan Bruce; nieces, nephews, cousins and friends. She was preceded in death by her siblings: Lance Parrish, Janice Schmidt and Pam Rackley and one grandson, Michael Anthony Zerrer. In lieu of flowers expressions of sympathy may be made to Siteman Cancer Care or BJC Hospice in care of KEMPER- KEIM Family Funeral Chapel, P.O. Box 222 Troy, MO 63379. Arrangements are under the direction of KEMPER- KEIM Family Funeral Chapel; 351 Monroe Street Troy, MO 63379. Online condolences may be made at www.kemperkeimfamilyfuneralchapel.com Phone 636-528-8221

The family of Melissa "Missy" Ann Summers created this Life Tributes page to make it easy to share your memories.

Send flowers to the Summers family.