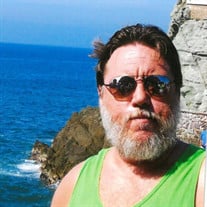 Michael Earl English, 67, of Hawk Point, Missouri, passed away on Friday, March 18, 2022 at his residence in Hawk Point, Missouri. He was born on January 24, 1955 in St. Louis, Missouri, a son of the late Earl and Josie (Barton) English. Michael was united in marriage to Geneva Lee Jackson on March 24, 1973 in Wellsville, Missouri and to this union one son and one daughter were born. Michael worked for Burlington Northern Railroad for several years and retired as a dump truck driver with over 35 years of dedication with the Lincoln County Highway Department. In his earlier years he was a member of the VFW Men’s Auxiliary in Hawk Point and a volunteer with the Hawk Point Fire Department. Michael enjoyed riding his Harley Davidson Motorcycles, going to car shows and watching car races. He loved spending time with his family, traveling and liked to visit the water, even if it was a beach or a lake. Michael was a very reserved man, who valued the time he spent with his family and had a special place in his heart for his dogs. Michael is survived by his wife, Neva English of Hawk Point, MO; one son and one daughter: Chad English of Hawk Point and Mikki Wuelling of Ballwin, MO; one brother, Lee Browning and wife Carol of O’ Fallon, MO, three grandchildren: Skyla Birchfield (Johnny), Karlee Wuelling and Wyatt Wuelling; one great-grandson, Jaxon Birchfield; one half-sister, Gayle Fagle; nieces, nephews, cousins and friends. He was preceded in death by his parents. Family and friends will be received from 2:00 p.m. to 4:00 p.m. on Saturday, March 26, 2022 at KEMPER-KEIM Family Funeral Chapel located at 41 Farm Lane Hawk Point, MO 63349. Expressions of sympathy may be made to New Leash on Life Rescue in care of Kemper-Keim Family Funeral Chapel P.O. Box 222 Troy, MO 63379. Arrangements are under the direction of Kemper-Keim Family Funeral Chapel; 41 Farm Lane Hawk Point, MO 63349. Online condolences may be made at www.kemperkeimfamilyfuneralchapel.com Phone 636-338-4375

The family of Michael Earl English created this Life Tributes page to make it easy to share your memories.

Send flowers to the English family.