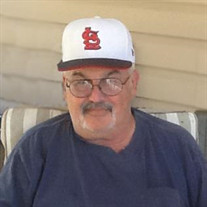 Michael Eugene Knight, Sr., 62, of Troy, Missouri, passed away on Monday, April 27, 2015 at St. Joseph Hospital West in Lake Saint Louis, Missouri. He was born on September 7, 1952 in Chicago, Illinois to Clifford and Helen (Horton) Knight. Michael was united in marriage to Donna Degetter in February of 1994 in Illinois and she preceded him in death. Michael worked various jobs as a Truck Driver for a trash company and making deliveries. He enjoyed playing several games of Texas Holdem on the computer and watching NASCAR while rooting on his favorite drivers, Dale Earnhardt and Dale Earnhardt, Jr. He was a baseball enthusiast, who was very knowledgeable of the stats of some of the greatest players. Michael loved drinking his coffee and telling stories from the good ol’ days. He is survived by his children, Michael Knight, Jr. of Troy, Christa Knight (Scott Bennett) of Troy, Robyn Knight (Mike Biondo) and Jamie Zavattieri (Micah) of O’Fallon; one sister, Sherry Bradley of KY; eleven grandchildren, three great-grandchildren and another one on the way and numerous relatives. He was preceded in death by his parents, wife and one brother, Greg Knight. Friends will be received from 1:00 p.m. to 3:00 p.m. on Saturday, May 2, 2015 at Kemper-Millard-Keim Family Funeral Chapels. Memorial service will be held at 3:00 p.m. at the Chapel. Expressions of sympathy may be made to the American Cancer Society or American Breast Cancer Foundation, in care of Kemper-Millard-Keim Family Funeral Chapel; P.O. Box 222, Troy, MO 63379. Online condolences may be made at www.kempermillardkeimfamilychapels.com Ph.(636) 528-8221

The family of Michael Knight Sr. created this Life Tributes page to make it easy to share your memories.

Send flowers to the Knight family.