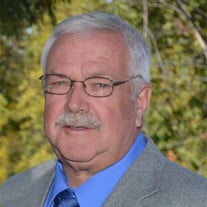 Michael “Mike” Elmer Bockhorst, 72, of Troy, Missouri passed away on Wednesday, December 18, 2019 in Troy, Missouri. Mike was born on June 30, 1947 in St. Louis, Missouri, a son of the late Elmer Charles William and Margaret Ann (Dreon) Bockhorst. He was united in marriage to Diane Marie Witthaus on April 20, 1968 at the Sacred Heart Catholic Church in Troy, Missouri and to this union two sons and two daughters were born. Mike graduated in 1965 from Buchanan High and continued his education at Ranken Technical College in Gas and Diesel Engines. He served his country in the United States Army from 1966 until he was honorably discharged in 1968. Mike was a lifetime farmer, growing crops and raising livestock on the family farm, Bockhorst Brothers Farm and later Happy Hollow Farm. He served on various boards and organizations, including Kiwanis, Farm Bureau, University of Missouri Extension, Farm Service Agency, he became a member of the Trojan Villa Senior Housing Board of Directors at its inception in 1979 and was currently serving as its President. An active member of the First Christian Church since he was 10 years old, he was an Elder of the First Christian Church, Disciple’s Care Team, served on the SEGA Board and Building Co-Chair of the Fellowship Hall. Mike and Diane were foster parents for 7 years. He liked attending Thursday morning Veterans Coffee Talk and was proud to have the opportunity to go on the Central Missouri Honor Flight in August of 2018. He was a collector of John Deere tractors, enjoyed wood working and took great pride in his garden. Mike enjoyed the memories he made with his family especially his grandchildren. He is survived by his wife of 51 years, Diane Bockhorst of Troy, MO; two sons and two daughters: Lisa Putting (Jerry) of Columbia, MO, Charles Bockhorst of Troy, MO, Amy West (Mark) of St. Peters, MO and Aaron Bockhorst (Courtney) of Troy, MO; two brothers and one sister: Lee Bockhorst (Betty) of Troy, MO, Mary Vanacker of Holts Summit, MO and Samuel Bockhorst (Charlene) of Troy, Mo; seven grandchildren: Lucas Bockhorst, Nicholas Putting, Chloe Bockhorst, Emily West, Sarah Putting, Anna West and Ava Bockhorst; nieces, nephews, cousins and many friends. He was preceded in death by his parents, one brother, William Bockhorst, Sr. and one infant sister, Emma. Family and friends will be received from 4:00 p.m. to 8:00 p.m. on Sunday, December 22, 2019 at First Christian Church located at 1302 Boone Street Troy, MO 63379. An additional visitation will be held from 9:00 a.m. to 11:00 a.m. on Monday, December 22, 2019 at the First Christian Church. Funeral service will be held at 11:00 a.m. on Monday, December 23, 2019 at First Christian Church located at 1302 Boone Street Troy, MO 63379. Expressions of sympathy may be made to Troy Kiwanis Park or First Christian Church, in care of Kemper-Millard-Keim Family Funeral Chapel P.O. Box 222 Troy, MO 63379. Arrangements are under the direction of Kemper-Millard-Keim Family Funeral Chapel; 351 Monroe Street, Troy, Missouri 63379. Online condolences may be made at www.kempermillardkeimfamilyfuneralchapel.com Phone 636-528-8221

The family of Michael "Mike" Elmer Bockhorst created this Life Tributes page to make it easy to share your memories.

Send flowers to the Bockhorst family.