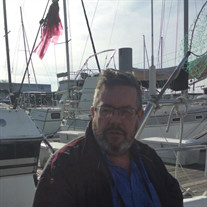 Michael Duane Moody, 53, of Winfield, Missouri, passed away on Friday, May 15, 2020 at SSM Health DePaul Hospital in St. Louis, Missouri. He was born on January 31, 1967 in Austin, Texas and was the son of Johnnie and Margaret (Parker) Moody. Michael was united in marriage to Melissa Ewald on December 21, 2001 in Las Vegas, Nevada. Michael graduated from Wayne High School in Huber Heights, Ohio in 1985 and continued his education earning his master’s degree in Business Administration from Missouri Baptist. He served his country in the United States Army from 1986 to 1989, until he was honorably discharged. Michael was a computer teacher for Missouri Baptist for many years. Since 2004, Michael and Melissa owned and operated Mike’s Tech Spot with two locations in Troy and Bowling Green. He was never at idle, if he wasn’t working on a computer, he was behind a camera. Michael had a true love for the ocean and had future plans for purchasing a sailboat and traveling. He was always watching YouTube videos on photography and sailboats. Michael was so smart, kind, never angry, had the most positive attitude and he was easy to be around. He is survived by his loving wife, Melissa Moody of Winfield, MO; his father, Johnnie Moody of Winfield, MO; one sister, Tina Orr of Jefferson City, MO; mother-in-law and father-in-law: Les and Mary Sue Thompson of Troy, MO; brothers-in-law and sisters-in-law: Audry Thompson (James Eldreth) of State College, PA, John Thompson (Grace) of Wentzville, MO and Phil Thompson (Ashley) of Virginia Beach, VA; nieces and nephews: Chelsea Dyson (Stephen), Devon Orr, William and Cameron Thompson, Landon Rodriguez and Alexander Thompson; great-niece and great-nephew: Gatlin and Rayleigh; and many friends. He was preceded in death by his mother, Margaret Moody. Services will be held at a later date. Expressions of sympathy may be made to Buddy Bags in care of Kemper-Millard-Keim Family Funeral Chapel P.O. Box 222 Troy, MO 63379. Arrangements are under the direction of Kemper-Millard-Keim Family Funeral Chapel; 351 Monroe Street, Troy, Missouri 63379. Online condolences may be made at www.kempermillardkeimfamilyfuneralchapel.com Phone 636-528-8221

Michael Duane Moody, 53, of Winfield, Missouri, passed away on Friday, May 15, 2020 at SSM Health DePaul Hospital in St. Louis, Missouri. He was born on January 31, 1967 in Austin, Texas and was the son of Johnnie and Margaret (Parker) Moody.... View Obituary & Service Information

The family of Michael Duane Moody created this Life Tributes page to make it easy to share your memories.

Michael Duane Moody, 53, of Winfield, Missouri, passed away on...

Send flowers to the Moody family.