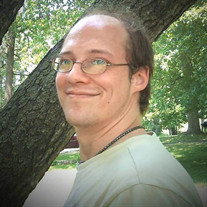 Michael William Zimmerly, 35, of Troy, Missouri, passed away on Sunday, October 21, 2018 in Troy, Missouri. He was born on November 1, 1982 in St. Louis, Missouri. He was the son of William Bruce and Pamela Renee (Graham) Zimmerly. Michael attended Troy Buchanan High School and worked as a Laborer. He was an avid reader, enjoyed cooking and crafting. Michael spent most of his free time on his computer and playing X-Box. He was a great practical joker and told some of the best stories. He is survived by his mother, Pam Belcher and husband Steve of Winfield, MO; one son, Jacob Michael Brannan; two sisters and one brother: Rachael Zimmerly and husband Purevdavaa Battur of St. Louis, MO, Brittany Dey of Brighton, IL and Josh VanDoren of Brighton, IL; nieces, nephews, aunts, uncles, cousins and friends. He was preceded in death by his father, William Bruce Zimmerly, maternal grandmother, Vanda Johnson and one brother-in-law, Jacob Lee Dey. Services will be held private at KEMPER-MILLARD-KEIM Family Funeral Chapel. Expressions of sympathy may be made to the The Family of Michael William Zimmerly in care of KEMPER-MILLARD-KEIM Family Funeral Chapel, P.O. Box 222 Troy, MO 63379. Arrangements are under the direction of KEMPER-MILLARD-KEIM Family Funeral Chapel; 351 Monroe Street Troy, MO 63379. Online condolences may be made at www.kempermillardkeimfamilyfuneralchapel.com Phone 636-528-8221

The family of Michael William Zimmerly created this Life Tributes page to make it easy to share your memories.

Send flowers to the Zimmerly family.