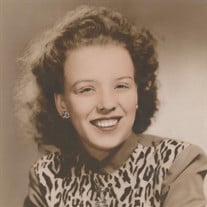 Mildred Ilene Topliff, 81, of Troy, Missouri, passed away peacefully on March 16, 2015 at her residence. She was born on May 22, 1933 in Wardell, Missouri, the daughter of the late Millard Eugene and Lena Irene (Powell) Scroggins. Mildred was united in marriage to Guy Robert Topliff on July 18, 1947 in Peach Orchard, Arkansas. To this union one son and three daughters were born. Mildred completed her high school education and then went to secretary school for writing and typing and later cosmetology school. For many years she worked as a factory worker where they made shoe boxes. In her earlier years she liked fishing, playing the piano, going to garage sales and flea markets. Mildred also enjoyed crocheting afghans and playing the penny slots at the Casino. She is survived by her loving husband Guy Robert Topliff, Sr. of Troy; children, Barbara Ann Young of Arnold, Guy Robert Topliff, Jr. of Jennings and Penny Arlene Johnson and husband Floyd of Florissant; grandchildren, Robert J. Greenwood, Jr. Denise D. Witte and Autumn L. Burr; great-grandchildren, Alex Greenwood, Timmy Greenwood and Aden Lee Rule and numerous relatives. She was preceded in death by her parents, one daughter, Sharon K. Lajeuness, brother, Sam Beard, sister, Opal Lancaster, son-in-law, Russell Young, daughter-in-law, Gloria Topliff, and granddaughter, Desiree Lajeuness. Friends will be received from 10:00 a.m. to 11:00 a.m. on Saturday, March 21, 2015 at KEMPER-MILLARD-KEIM Family Funeral Home/ Troy Chapel. Funeral service will be held at 11:00 a.m. at the Chapel. Arrangements under the care of Kemper-Millard-Keim Family Funeral Chapel; P.O. Box 222, Troy, MO 63379. Online condolences may be made at www.kempermillardkeimfamilychapels.com Ph.(636) 528-8221

Mildred Ilene Topliff, 81, of Troy, Missouri, passed away peacefully on March 16, 2015 at her residence. She was born on May 22, 1933 in Wardell, Missouri, the daughter of the late Millard Eugene and Lena Irene (Powell) Scroggins. Mildred was... View Obituary & Service Information

The family of Mildred I. Topliff created this Life Tributes page to make it easy to share your memories.

Send flowers to the Topliff family.