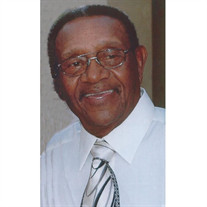 Odell Williams, 80, of Foley, Missouri, passed away on Tuesday, April 14, 2015 at his residence. He was born on January 3, 1935 in Summerfield, Louisiana, a son of the late Odie Williams and Aggie Brooks. Odell was united in marriage to Lillie St. Cyr on September 9, 1997 in Shreveport, Louisiana. He attended Free Union School in EL Dorado, AR and graduated from Berkley High School in California. Odell retired after 37 years from General Motors as a quality control specialist. He served in the United States Army and was honorably discharged. He attended and was an usher at the Christ Temple Church in Shreveport. Odell enjoyed being outdoors, hunting, fishing, and taking care of his yard. He liked to watch the news on NBC or CNN. Odell is survived by his loving wife, Lillie Williams of Foley; children, Norville Shelton (Lucretia) of Louisiana, Vernell Shelton, Sr. (Jennette) of Florida, Harold Shelton (Sonja) of Louisiana, Paulette Brooks of Texas, and Tira Carter (Larry) of Winfield, MO; siblings, Eddie Williams of Camden, AR, Dorothy Mae Washington of Overton, TX, Georgia Alexander of Camden, AR, Mary Hayes of Dallas, TX, and Charles Ray Patton of Houston, TX; fifteen grandchildren, many great-grandchildren, nieces, nephews, cousins, numerous relatives, and friends. He was preceded in death by his parents, five siblings, and one granddaughter, Alexandria Shelton. Friends will be received from 10:30 a.m. to 11:30 a.m. on Monday, April 20, 2015 at KEMPER-MILLARD-KEIM Family Funeral Home/ Troy Chapel (351 Monroe Street Troy, MO 63379). Service will be held at 11:30 a.m. on Monday, April 20, 2015 at the Chapel. Officiating the service will be Dr. Henry Brewer. Interment will be held at the Jefferson Barracks National Cemetery with full military honors. Expressions of sympathy may be made to the American Cancer Society, in care of Kemper-Millard-Keim Family Funeral Chapel; P.O. Box 222, Troy, Missouri 63379. Online condolences may be made at www.kempermillardkeimfamilychapels.com Phone 636-528-8221

Odell Williams, 80, of Foley, Missouri, passed away on Tuesday, April 14, 2015 at his residence. He was born on January 3, 1935 in Summerfield, Louisiana, a son of the late Odie Williams and Aggie Brooks. Odell was united in marriage to Lillie... View Obituary & Service Information

The family of Odell Williams created this Life Tributes page to make it easy to share your memories.

Odell Williams, 80, of Foley, Missouri, passed away on Tuesday,...

Send flowers to the Williams family.