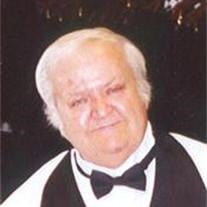 Orville "Art" Ray Scarbrough, 77 of Troy, Missouri, passed away on Friday, August 16, 2013 at the Troy Manor. He was born on September 20, 1935 in St. Louis County and was a son of the late Ray W. and Jewel (Rossen) Scarbrough. Orville was united in marriage to Nancy Volland on March 22, 1965 at the Justice of the Peace Center in Illinois. To this union four daughters were born. Orville enlisted in the Army in 1950 and he served in the Korean War as a tank driver and drill instructor. While serving his country he was wounded in battle, earned a purple heart and was honorably discharged in 1957. Orville had many jobs over the years, his favorite was Truck Driving, which he drove for 15 years and loved it dearly. He was a past member of the First Baptist Church in Moscow Mills, Missouri. Orville enjoyed junking, collecting coins, listening to country music especially, Johnny Cash and loved watching John Wayne movies and War movies. He was a loving, caring, family man, who always put his family first and will be deeply missed by those who knew and loved him. He is survived by his wife of 48 years, Nancy Scarbrough of Troy, Missouri; four daughters, Lorie Myers (J.R.) of Moscow Mills, Missouri, Linda Korando of O’Fallon, Missouri, Lisa Scarbrough of Troy, Missouri and LeeAnn Barton (Roy) of Moscow Mills, Missouri; nine grandchildren, six great-grandchildren, one sister, one nephew, numerous relatives and many friends. He was preceded in death by his grandma Pat, parents, one sister and a beloved dog, Scrappy. Friends will be received from 4:00 p.m. to 7:00 p.m. on Wednesday, August 21, 2013 at KEMPER-MARSH-MILLARD Family Funeral Home / Troy Chapel. Funeral services will be held at 7:00 p.m. at the chapel. Expressions of sympathy may be made to the American Diabetes Association or American Heart Association. Arrangements are under the direction of Kemper-Marsh-Millard Family Funeral Chapel; P. O. Box 222, Troy MO. Online condolences may be made at www.kempermarshmillardfamilychapels.com Ph.(636) 528-8221

Orville "Art" Ray Scarbrough, 77 of Troy, Missouri, passed away on Friday, August 16, 2013 at the Troy Manor. He was born on September 20, 1935 in St. Louis County and was a son of the late Ray W. and Jewel (Rossen) Scarbrough. Orville was united... View Obituary & Service Information

The family of Orville Ray Scarbrough created this Life Tributes page to make it easy to share your memories.