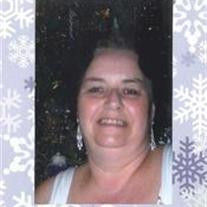 Pamela Sue Christine, 54, of Moscow Mills, Missouri, passed away on Monday, January 16, 2012 at St. Joseph’s West in Lake Saint Louis, Missouri. She was born on June 28, 1957 in St. Louis, Missouri a loving daughter of Charles D. Girardier and Myrtle Green. Pamela attended school in Sullivan and graduated college from East Central in Union, Missouri. She was employed for Pohlman, Inc. in Chesterfield, Missouri. She enjoyed crafting, yard sales, e-bay and above all haggling. She is survived by her father, Charles Girardier and wife Margaret of Wright City, Missouri; children: Eric Loness and wife Katie of Bourbon, Missouri, David Christine of Troy, Missouri, Christopher Loness of Troy, Missouri, Sondi Loness of Troy, Missouri and Lexi Girardier of Troy, Missouri; special companion, David Natale of Moscow Mills, Missouri; one brother, Dave Girardier of Sullivan, Missouri; one sister, Sandi Girardier of Sullivan, Missouri, eight grandchildren and many friends. She was preceded in death by her mother and step-mother, Ester Girardier. Family and Friends will be received from 1:00 p.m. to 3:00 p.m. on Saturday, January 21, 2012 at KEMPER-MARSH-MILLARD Family Funeral Home / Troy Chapel. Funeral service will follow at 3:00 p.m. on Saturday, January 21, 2012 at the chapel. In lieu of flowers expressions of sympathy may be made to The Family Of Pamela S. Christine. In care of Kemper-Marsh-Millard Family Funeral Chapel; P.O. Box 222, Troy, MO 63379. Online condolences may be made at www.millardfamilychapels.com Ph.(636) 528-8221

The family of Pamela Christine created this Life Tributes page to make it easy to share your memories.

Send flowers to the Christine family.