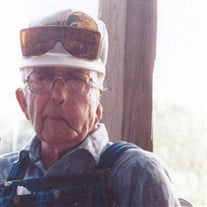 Parren Boyse, Jr., 95, of Troy, Missouri passed away on Friday, January 9th, 2015 at Elsberry Healthcare Center in Elsberry. Junior was born on October 16, 1919 in Troy, Missouri, he was the son of the late Parren Boyse, Sr. and Jessie Belle (LaRue) Boyse. Junior’s grandparents, were Green Henderson Boyse and Cassie Ann (Hunter) Boyse and William Richard LaRue and Hattie E. (Dowell) LaRue). Junior was born and lived his entire life on the Boyse Family Farm on Bob’s Creek in Troy. He attended Taylor School and later graduated from Buchanan High in 1937. Junior was a farmer and a union carpenter. He joined, Winfield Local 1875 in 1950 and retired in 1981. Junior was passionate about politics and was a member of the Lincoln County Republican Club in the area for many years. He served as a board member for the Thornhill Cemetery and remained active in the Taylor 4-H Club. Junior had a special place in his heart, for the many dogs and cats he had over the years. He enjoyed roller skating and was a regular on skate night, at the old Legion Hall. Junior loved to visit, with his many cousins of the area, telling the stories of days gone by and had an excellent memory of the history of the area. Junior could not only remember all the familiar faces from the 1920’s and 30’s, but their family history and what kind of car and tractor they had. He remember in great detail of going to Troy with his as parents as a small boy and drinking the water from the old Troy spring. He enjoyed farming with his father and being able to help with the threshing as a young boy. Some of Junior’s favorite memories was the time he spent with his family and friends. He was very close to his mother, father, his many uncles, aunts and cousins. Junior had a wonderful ability to always see the good in people and will be missed by his many cousins and friends. Friends will be received from 10:30 a.m. to 1:30 p.m. on Monday, January 12, 2015 at the KEMPER-MILLARD-KEIM FAMILY FUNERAL HOME/Troy Chapel. Funeral service will be held at 1:30 p.m. following the visitation. Interment will be held at Thornhill Cemetery. In lieu of flowers expressions of sympathy may be made Thornhill Cemetery, in care of Kemper-Millard-Keim Family Funeral Chapel; P.O. Box 222, Troy, MO 63379. Online condolences may be made at www.kempermillardkeimfamilychapels.com Ph.(636) 528-8221

Parren Boyse, Jr., 95, of Troy, Missouri passed away on Friday, January 9th, 2015 at Elsberry Healthcare Center in Elsberry. Junior was born on October 16, 1919 in Troy, Missouri, he was the son of the late Parren Boyse, Sr. and Jessie Belle... View Obituary & Service Information

The family of Parren Boyse Jr. created this Life Tributes page to make it easy to share your memories.

Send flowers to the Boyse family.