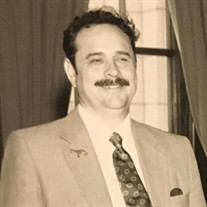 Patrick Hardesty Burch, 69 of Creve Coeur, Missouri, passed away on Thursday, July 5, 2018 at his daughter’s residence in Winfield, MO. He was born on February 8, 1949, in Houston, Texas and was the son of late Leslie and Marie (Hahn) Burch. He was united in marriage to Julia Herndon on November 6,1976 in Macon, Georgia. Patrick graduated from Florissant Valley Community College. In his early years he worked for Commercial Sanitation Hauling as a dispatcher. Upon retirement, he was an advocate for many working as a lobbyist for people with disabilities, he also worked to get the food stamp taxes reduced. He was a member of the Missouri Council of the Blind and his local Lions club. He enjoyed reading, collecting Army and Civil War momentous. His favorite music was Blues and Southern Rock. Patrick was very involved in politics, he was a wonderful, husband, father and papa. He is survived by his loving wife of 41 years, Julia Burch of Creve Coeur, MO; two daughters, Kimberly Jewel Foley husband Mark of Miami, FL and Nicole Michelle Skaggs and husband Ronnie of Winfield, MO; two brothers: Gary Burch and wife Sandra of Webster Grove, MO and Tim Burch and wife Andrea of DeSoto, MO; one sister-in-law, Vickey Burch of Leasburg, MO; seven grandchildren: Derrick, Kiersten, Karter, R.J., Jilian, Caitlin and Matilda, nieces, nephews and friends. He was preceded in death by his mother and father, one daughter, Krystal Marie Burch on February 20, 1999 and one brother, Michael Burch. Friends will be received from 3:00 p.m. to 6:00 p.m. on Tuesday, July 10, 2018 at Kriegshauser Mortuary-West Chapel located at 9450 Olive Blvd St. Louis, MO 63132. A funeral service will be held at 6:00 p.m. on Tuesday, July 10, 2018 at the Kriegshauser Mortuary-West Chapel. In lieu of flowers expressions of sympathy may be made to The Seeing Eye, in care of Kemper-Millard-Keim Family Funeral Chapel; 351 Monroe Street, Troy, Missouri 63379 Arrangements are under the direction of Kemper-Millard-Keim Family Funeral Chapel; 351 Monroe Street, Troy, Missouri 63379. Online condolences may be made at www.kempermillardkeimfamilyfuneralchapel.com Phone 636-528-8221

Patrick Hardesty Burch, 69 of Creve Coeur, Missouri, passed away on Thursday, July 5, 2018 at his daughter&#8217;s residence in Winfield, MO. He was born on February 8, 1949, in Houston, Texas and was the son of late Leslie and Marie (Hahn)... View Obituary & Service Information

The family of Patrick Hardesty Burch created this Life Tributes page to make it easy to share your memories.

Send flowers to the Burch family.