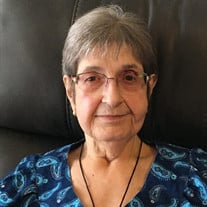 Paula Marie Leitman, 76, of Troy, Missouri, passed away on Monday, May 6, 2022 at her residence in Troy, Missouri. She was born on July 11, 1945 in St. Charles, Missouri a daughter of Fritz and Lucille (Segrass) Leitman, Jr. Marie graduated from Buchanan High in 1966 and continued her education at Missouri Baptist Nursing Program. She worked at as a nurse for Baptist Hospital in St. Louis, Mo, Brookdale Hospital in Oakland, CA and was a nurse and Vice President for Bio Medic Plasma Center from which she retired in 2013. In her earlier years she was a member of the Keelstone 4-H Club and recently American Blood Resources Association and Plasma Protein Therapeutic Association. Marie was a very determined woman, who was never afraid to try anything and she gave life her all. Over the years Marie had several physical set backs and she never let anything stop her. Marie was a very spiritual woman, who saw the positive in everything and lived life to its fullest. She is survived by her nieces and nephews: David Leitman and wife Connie, Len Bockhorst, Deborah Schimweg and husband Chris and Diana Van Pelt and many friends. She was preceded in death by her father and mother: Fritz and Lucille, one sister, Elanor Leitman, one brother, Paul Leitman, one nephew, Jim Van Pelt and her four legged friend, BeDe. Family and friends will be received from 9:00 a.m. to 11:00 a.m. on Monday, June 13, 2022 at the KEMPER-KEIM Family Funeral Chapel located at 351 Monroe Street, Troy, MO 63379. Funeral service will be held at 11:00 a.m. on Monday, June 13, 2022 at KEMPER-KEIM Family Funeral Chapel in Troy, MO. Internment will be held at the Anderson Hill Cemetery in Moscow Mills, Missouri. Expressions of sympathy may be made to the ALS in care of Kemper-Keim Family Funeral Chapel P.O. Box 222, Troy, MO 63379. Arrangements are under the direction of Kemper-Keim Family Funeral Chapel; 351 Monroe Street, Troy, Missouri 63379. Online condolences may be made at www.kemperkeimfamilyfuneralchapel.com

Paula Marie Leitman, 76, of Troy, Missouri, passed away on Monday, May 6, 2022 at her residence in Troy, Missouri. She was born on July 11, 1945 in St. Charles, Missouri a daughter of Fritz and Lucille (Segrass) Leitman, Jr. Marie graduated... View Obituary & Service Information

The family of Paula Marie Leitman created this Life Tributes page to make it easy to share your memories.

Paula Marie Leitman, 76, of Troy, Missouri, passed away on Monday,...

Send flowers to the Leitman family.