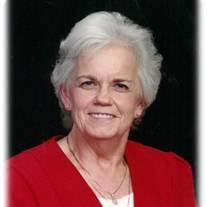 Peggy Jane Wickell-Turner-Voss, 77, of Bowling Green, Missouri, passed away on Friday, December 10, 2021 in Troy, Missouri. She was born on December 28, 1943, in Edgewood, Missouri, a daughter of the late Earl and Helen (Henderson) Wickell. Peggy lived in Edgewood, MO until 1953, when they moved to Cyrene, Missouri. She accepted her lord and Savior at a revival preached by brother Harold Anderson at the age of 6, at Cyrene Baptist Church in 1949. She had been a member off and on all her life. Peggy attended grade school at Cyrene and Eagle Point School. In May 1961 she graduated from Bowling Green High School. In 1961 Peggy became a member of the Sulfur Lick Baptist Church, where the family gave the church 2 acres of ground and helped build a new church. Peggy was an active member, where she served on numerous boards and taught Sunday school classes. Peggy worked at Walmart in Troy for 16 years and Wentzville for 2 years. In 1997 she went back to work for Ruth Jensen Village in working in a group home with some very special men for 12 years. She enjoyed sewing, cleaning, and working in her yard, loved to care for friends and spend time with her children, grandchildren and great-grandchildren. Peggy was known for baking the best pies and cakes. She liked to read and work on puzzles. Peggy valued the memories she made with her family. She is survived by two sons and one daughter: Terry Turner and wife Cherrie of Troy, MO, Harold Turner of Vandalia, MO and Earlene Zumwalt and husband George of Troy, MO; grandchildren: Stephanie Ohmes (Stephen), Madison Zimmer (Tommy), Avery O’Guin (Kyle), TJ Turner, Ashlee Feltz, Zach Feltz (Caitlynn Harmon) and Macey Heinz (Christian); great-grandchildren: Caleb, Rylee, Trevor, Warren, Nora, Waylon, Charlotte, Amylia, Kinzley, Sophia, Elara and Willow; step-grandchildren: Michael Zumwalt (Christina), Garrett Zumwalt and Montana Zumwalt; step great-grandchildren: Raelynn, Sawyer, Serenity, Chloe and Abel; one sister-in-law: Nancy Wickell; special friends: Martha, Janet and Irene and numerous friends. She was preceded in death by her parents, one son, Jimmy Lee Turner; brothers and sisters: Lou, David, Rex, Billy, Stella, Madeline and Elizabeth; sisters-in-law, Dorothy and Marggie; brothers-in-law: Gene and Charlie. Family and friends will be received from 4:00 p.m. to 8:00 p.m. on Wednesday, December 15, 2021 at KEMPER- KEIM Family Funeral Chapel located at 351 Monroe Street Troy, MO 63379. Funeral service will be held at 11:00 a.m. Thursday, December 16, 2021 at KEMPER- KEIM Family Funeral Chapel located at 351 Monroe Street Troy, MO 63379. Interment will be held at Edgewood Cemetery. Expressions of sympathy may be made to Edgewood Cemetery and Ruth Jensen House in care of Kemper- Keim Family Funeral Chapel P.O. Box 222 Troy, MO 63379. Arrangements are under the direction of Kemper- Keim Family Funeral Chapel; 351 Monroe Street Troy, MO 63379. Online condolences may be made at www.kemperkeimfamilyfuneralchapel.com Phone 636-528-8221

Peggy Jane Wickell-Turner-Voss, 77, of Bowling Green, Missouri, passed away on Friday, December 10, 2021 in Troy, Missouri. She was born on December 28, 1943, in Edgewood, Missouri, a daughter of the late Earl and Helen (Henderson) Wickell.... View Obituary & Service Information

The family of Peggy Wickell-Turner-Voss created this Life Tributes page to make it easy to share your memories.

Send flowers to the Wickell-Turner-Voss family.