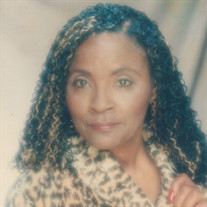 Rachel Lee Sydnor, 73, of Troy, Missouri, passed away on Friday, September 18, 2015, at her home. She was born April 10, 1942, in Bowling Green, Missouri, the daughter of the late Alfonzo and Cornelia “Hutt” (Perkins) Shelton. Rachel graduated from Troy Buchannan High School in 1959. She worked as a Personnel Transaction Supervisor for the Donavan State Prison in San Diego, California, and retired from the California Department of Transportation. She is a member of the Wesley United Methodist Church in Troy and the Sonda BBQ Bowling League. Rachel’s greatest loves were her family and music. She loved to sing the Blues with her band. They called themselves “Lady Rachel and the Royal Knights” and were active from the 1960’s until 1999. Rachel’s smile lit up when she would talk about her days singing along side of BB King, Johnny Taylor, and Coco Taylor, just to name a few. Rachel is survived by two daughters: Kim Sydnor and husband Darryl Walton of Troy; Regina Sydnor and partner Cassandra Barkley of Troy; one son: Edwin Sydnor and wife Jackie of Troy; one brother: Donald Shelton and wife Joann of Troy; 9 grandchildren: Jerome Morris, Rachelle Ogden, Ki-marryl Walton, Steven Russell, Deja Pollitt, Deandre Pollitt, Kristara Munford Ditch, Kontisha Williams and Shiela Medero; 4 great-grandchildren: Ashanti Ogden, Rohon Ogden, Jehaleleel Gandy and Z-ikia Lewis Ogden. She is also survived by a host of aunts, uncles, nieces, nephews, cousins and friends. Friends will be received from 1:00 p.m. to 2:00 p.m. Sunday, September 27, 2015, at the Wesley United Methodist Church, located at 337 Locust Street Troy, MO 63379. Funeral services will follow at 2:00 p.m. Sunday, September 27, 2015, at the Wesley United Methodist Church with Rev. Henry Brewer officiating. Pallbearers will be Edwin Sydnor, Steven Russell, Jerome Morris, Donald Shelton, Jr., Rachelle Ogden, Rohon Ogden and Darryl Walton. The interment will be private for the family in the Troy City Cemetery. Expressions of sympathy may be made to the Wesley United Methodist Church. Arrangements are under the direction of KEMPER-MILLARD-KEIM Family Funeral Chapel; 351 Monroe Street; Troy, MO 63379. Online condolences may be made at www.kempermillardkeimfamilychapels.com Ph.(636) 528-8221

The family of Rachel Lee Sydnor created this Life Tributes page to make it easy to share your memories.

Rachel Lee Sydnor, 73, of Troy, Missouri, passed away on Friday,...

Send flowers to the Sydnor family.