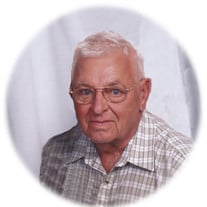 Raymond B. Bartoszkiewicz, 88, of Troy, Missouri passed away on Saturday, December 12, 2015, surrounded by his family at his residence. He was born on November 29, 1927 in DuBois, Illinois, the son of the late Andrew and Kathryn (Fiegal) Bartoszkiewicz. He was united in marriage to Ellen Anne England on October 9, 1976 at the Silex Presbyterian Church and she preceded him in death on September 20, 2015. Ray served his country in the Army during the Korea War and was honorably discharged. At the age of 18 Ray began his employment at Alco Controls a division of Emerson Electric and retired after 42 years of dedication. He was a member of the Kohl Jeck VFW #2866 in St. Charles, MO. Ray enjoyed being outdoors, gardening, raising livestock and sitting in a lawn chair in the garage. He loved spending time with his family, especially the memories they made camping at Montauk State Park and fishing at the river. He is survived by one daughter, Kathryn Mullen and husband Corey Mullen of St. Louis; three sons: Greg Bartoszkiewicz, Richard Bartoszkiewicz and Ronald Bartoszkiewicz all of St. Louis; grandchildren: Raylee, Cayden and Kasia Mullen, Cindy Henry, Rebecca McKeever (Randy) and Angie Bartoszkiewicz; sisters-in-law and brothers-in-law: Melba Trenepohl and husband Richard of Elsberry, Betty McClellan and husband Jerry of Silex and Judy Housewright and husband Michael of Silex; nieces, nephews and friends. He was preceded in death by his parents, loving wife, one step-son, Steve Aversman; brother, Edward Bartoszkiewicz (Bertha); sister, Gertrude Szramkowski (Leonard); half siblings: Mary Gretzmacher, Annie Wayer, Peter Bartoszkiewicz, Elizabeth Bartoszkiewicz and Andrew Bartoszkiewicz and step-sisters: Catherine Bartoszkiewicz and Nettie Rodgers. Friends will be received from 4:00 p.m. to 8:00 p.m. on Wednesday, December 16, 2015 at KEMPER-MILLARD-KEIM Family Funeral Home / Troy Chapel. Funeral Mass will be held at 10:00 a.m. on Thursday, December 17, 2015 at Sacred Heart Catholic Church located at 100 Thompson Drive Troy, MO 63379. Officiating the Mass will be Fr. Tom Wissler. Interment will be held at the Auburn Cemetery in Silex, Missouri. Expressions of sympathy may be made to the Alzheimer’s Association, in care of Kemper-Millard-Keim Family Funeral Chapel; P.O. Box 222, Troy, MO 63379. Online condolences may be made at www.kempermillardkeimfamilychapels.com Ph.(636) 528-8221

Raymond B. Bartoszkiewicz, 88, of Troy, Missouri passed away on Saturday, December 12, 2015, surrounded by his family at his residence. He was born on November 29, 1927 in DuBois, Illinois, the son of the late Andrew and Kathryn (Fiegal) Bartoszkiewicz.... View Obituary & Service Information

The family of Raymond "Ray" B. Bartoszkiewicz created this Life Tributes page to make it easy to share your memories.

Raymond B. Bartoszkiewicz, 88, of Troy, Missouri passed away...

Send flowers to the Bartoszkiewicz family.