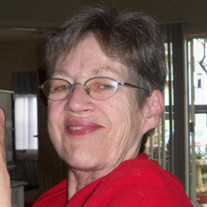 Rebecca A. Ferrell, 75, of Silex, Missouri, passed away unexpectedly on Tuesday, December 20, 2016 in Lincoln County. She was born on July 7, 1941 in Muncie, Indiana, and was the daughter of the late Alvin and Bernice (Weaver) Counts. Rebecca met the love of her life Charles L. Ferrell in 1956, after he was honorably discharged from the United States Army. On November 30, 1956 they were united in marriage in Irondale, Missouri and to this union five children were born. While the kids were growing up Rebecca was a homemaker, when she found the time she enjoyed sewing, quilting and cooking. Later in life Rebecca decided to further her education as an LPN Nurse and retired after 35 years in the Health Care Field. Rebecca was never at an idle if there was a task, she would complete it. She liked spending time outside in the yard, tending her garden, caring for her Irises and collecting eggs from the chickens. What Rebecca valued most of all, was the time she spent with her family, especially spoiling the grandchildren and great-grandchildren. She is survived by one son and three daughters: Melinda Cromer and husband Norman of Doe Run, Randy Ferrell and wife Jackie of Arnold, Pamela Ryback and husband Ron of Festus and Kathleen Smith of Silex; eleven grandchildren, fourteen great-grandchildren, three brothers, one sister, brothers-in-law, sisters-in-law, numerous relatives and friends. She was preceded in death by her parents, her husband Charles, one son, Duane Ferrell, one grandson, Matthew Ferrell, one great-grandson, Isiah Ferrell and one sister. Family and friends will be received from 11:00 a.m. to 1:00 p.m. on Friday, December 23, 2016 at KEMPER-MILLARD-KEIM Family Funeral Chapel, located at 351 Monroe Street Troy, MO 63379. Funeral service will be held at 1:00 p.m. at the Chapel. Interment will be held at a later date at the Big River Cemetery in Irondale, Missouri. Expressions of sympathy may be made to The Crossings Youth Ministry, in care of Kemper-Millard-Keim Family Funeral Chapels, P.O. Box 222 Troy, MO 63379. Online condolences may be made at www.kempermillardkeimfamilychapel.com Phone 636-528-8221

Rebecca A. Ferrell, 75, of Silex, Missouri, passed away unexpectedly on Tuesday, December 20, 2016 in Lincoln County. She was born on July 7, 1941 in Muncie, Indiana, and was the daughter of the late Alvin and Bernice (Weaver) Counts. Rebecca... View Obituary & Service Information

The family of Rebecca A. Ferrell created this Life Tributes page to make it easy to share your memories.

Rebecca A. Ferrell, 75, of Silex, Missouri, passed away unexpectedly...

Send flowers to the Ferrell family.