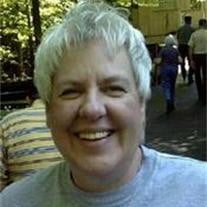 Rebecca “Becky” Scott-Lee, 61, of Troy, Missouri, passed away on January 1, 2014 at her son’ s residence in Troy. She was born on August 21, 1952 in Springfield, Missouri, the daughter of the late Ernest and Joyce Swearengine. She was united in marriage to James “Jim” Scott in 1993 and he preceded her in death on September 25, 2005. Becky later married Russell Lee in 2009 in Troy, Missouri. Becky graduated from Central High School in 1970 and continued her education earning her degree in education from Missouri Baptist College. Becky knew how to communicate with the hearing impaired, with the gift of sign language. The skill was very important while teaching special education in Silex and Winfield School District. When she was not teaching she worked for Super 8, Elderhaus and would assist the Lincoln Co. Sheriff Department with the hearing impaired cases. She was a member of the Elks Lodge #2805. Becky collected Americana décor and various Pez candy dispensers. She loved spending time with her family, especially her grandchildren. She was a loving, caring mother and Nana, who will be deeply missed. She is survived by her husband, Russell Lee of Troy, MO; her children, Kenneth Merrill (Eva) of Troy, MO, Benjamin Merrill (Leslie) of Troy, MO, Rachel Huber (Joe) of Troy, MO, Brian Scott of Troy, MO and Stacey Scott of Moscow Mills, MO; one sister, LeeAnn Sterling (Bill) Greeley, Colorado; grandchildren, Nicholas Marlett, Christopher Marek, Cody Johnston, Rebecca Merrill, Hayley Merrill, Logan Huber, Owen Huber, Brianna Scott, Brady Scott, Brogan Scott, Sierra Scott, Kameron Scott, Kole Scott, Alyiah Scott and Amaya Scott, nieces, nephews, cousins, and many friends. She was preceded in death by her parents, husband, Jim Scott and grandson, Jonathan Merrill. Celebration of life will be held at 11:00 a.m. on January 11, 2014 at the Journey Church in Troy, Missouri. Expressions of sympathy may be made to the American Heart Association . In care of Kemper-Marsh-Millard Family Funeral Chapels, P.O. Box 222 Troy, MO 63379. Online condolences may be made at www.kempermarshmillardfamilychapels.com ph. (636) 528-8221.

Rebecca “Becky” Scott-Lee, 61, of Troy, Missouri, passed away on January 1, 2014 at her son’ s residence in Troy. She was born on August 21, 1952 in Springfield, Missouri, the daughter of the late Ernest and Joyce Swearengine. She was united... View Obituary & Service Information

The family of Rebecca Scott-Lee created this Life Tributes page to make it easy to share your memories.

Send flowers to the Scott-Lee family.