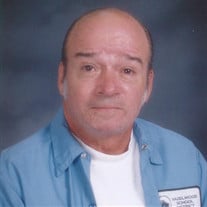 Richard L. Hynes, 74, of Troy, Missouri passed away on Tuesday, September 8, 2015, peacefully at his residence. He was born on March 2, 1941 in St. Louis, Missouri, the son of the late Anthony “Tony” and Grace (Salmeri) Hynes. He was united in marriage to Dimples O. Hatfield on April 7, 1959 at the Justice of the Peace in St. Louis, Missouri and to this union two sons and two daughters were born. Richard worked for the Jennings Streets Department for several years and worked part time for the Jennings Police Department. He retired as a custodian, after 10 years of dedication at the Hazelwood School District. In his earlier years he enjoyed being outdoors, fishing and hunting. Richard had a natural talent when it came to canvas painting. He is survived by his children, Richard “Rick” Hynes and wife Beth of Wentzville, Terry Hynes and wife Donna of Florissant, Sonia Hynes and significant other Bob Payeur of Florissant and Diana Schaffer and husband Rick of Wentzville; two brothers: Gary Hynes and wife Kay of North County and Marion Hynes and wife Joan of Jennings; grandchildren: Rob and Nikki, Mark, Sam, Piper, Nayomi, Jenifer, Jimmy, Katie, Amanda and Shawn, Michael and Michelle, Matthew, Alex and Megan; great-grandchildren: Patrick, Taylor, Kiera, Sophia, Skylar, Maximus, Dylan, Samara, Caleb, Moses, Evie and another on the way, nieces, nephews and numerous relatives. He was preceded in death by his parents. Friends will be received from 6:00 p.m. to 8:00 p.m. on Thursday, September 10, 2015 at the KEMPER-MILLARD-KEIM FAMILY FUNERAL HOME/ TROY CHAPEL. Interment will be held at the Memorial Park Cemetery. Expressions of sympathy may be made to the Lincoln County Relay for Life or Pets-A-Lone Sanctuary, in care of Kemper-Millard-Keim Family Funeral Chapel; P.O. Box 222, Troy, MO 63379. Online condolences may be made at www.kempermillardkeimfamilychapels.com Ph.(636) 528-8221

The family of Richard L. Hynes created this Life Tributes page to make it easy to share your memories.

Send flowers to the Hynes family.