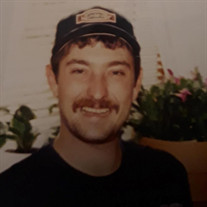 Richard “Ricky” Beck, 47 of Hawk Point, Missouri, passed away on Monday, November 2, 2020 at his residence in Hawk Point, Missouri. He was born on July 17, 1973 in Troy, Missouri and the son of Richard Dale and Linda (Eddy) Beck. He graduated from Clopton High School in 1993. Richard worked for Townsend Tree Trimming for several years. He enjoyed being outside, arrowhead hunting, gardening and BBQing. Richard was the happiest with his friends and family. He was a great cook and liked taking it easy with the ones he cared about. Richard didn’t know a stranger. He is survived by his, maternal grandmother, Betty Cox of Troy, MO; one daughter, Dakota Beck; one brother and one sister, Jena Frye of Troy, MO and one brother, Billy Larson of Iowa; nieces and nephews, including: Alexis Frye and Hayden Frye; one great-nephew, Manny Arreola; cousins and many friends. He was preceded in death by his mother, Linda Larson, paternal grandparents: Juanita and Clarence Beck and maternal grandfather, William Eddy. Services will be held at a later date. In lieu of flowers, expressions of sympathy may be made to The Family of Richard “Ricky” Beck in care of Kemper-Millard-Keim Family Funeral Chapel, P.O. Box 222 Troy, MO 63379. Arrangements are under the direction of Kemper-Millard-Keim Family Funeral Chapel; 351 Monroe Street Troy, MO 63379. Online condolences may be made at www.kempermillardkeimfamilyfuneralchapel.com Phone 636-528-8221.

The family of Richard "Ricky" Beck created this Life Tributes page to make it easy to share your memories.

Send flowers to the Beck family.