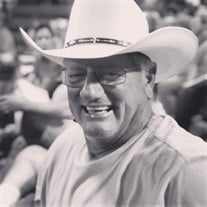 At 5:05PM on Friday, June 12, 2020, Robert “Bob” P. Brodt, Jr. (63 years old) put in his last full day and passed peacefully surrounded by his loved ones. We know he is rejoicing in heaven as he gets to embrace his sons, Dad, brother, and many others again. Bob was born to Robert P. Sr. and Bertha Brodt December 11, 1956. He was raised in Mount Bethel, Pennsylvania, with his three siblings, and lived across from the Delaware River. His family had many memories on the river, where he and his siblings would fish, tube and ski. He was an all-star basketball player and baseball player. After high school, Bob joined the Army and served as Military Policeman in Alaska. After his honorable discharge from the Army, he moved to Troy. He and his previous spouse, Debbie Thurmon, raised four children together Jenny, Joe, Mike and Rachel. He was a dedicated dad who could be found fishing, coaching, and spending all his spare time with his family. He became a policeman and detective with the Troy Police Department, later working for Old Monroe Police Department. Many will remember stern lectures from Officer Brodt, and many have shared that he influenced their life and changed them for the better. Coach Bob became a dedicated baseball coach for Troy Khoury League, and continued coaching and influencing many players for 35 years. Even if he wasn’t coaching, he could be found leaning on the fence offering advice on how to coach, and how to play. Bob successfully owned and operated B & B Electric for 25 plus years. He worked side by side with his employees, up until four weeks ago. His loyal employee, who became another son to him, Joe Cockrell has taken over the business and will carry on Bob’s legacy with pride! Along Joe’s side will be Bill, Dawson, Jack and Dom. After being friends for many years, Bob married Vicki Mennemeyer in 2013. They enjoyed their lives together and embraced and lived life to the fullest. Although their plans were cut short, the memories they made will forever be cherished. Between Bob and Vicki they have nine grandchildren, who they enjoyed spending their time with. Bob was happiest when he had his wife Vicki, and his cherished daughter Rachel at his side, and enjoyed cheering on his grandchildren at their games and activities. When friends, grandchildren, good food and a cold beverage were added he was in paradise. He is survived by his mother Bertha Brodt; his wife Vicki Mennemeyer; his daughter Rachel Dunard; his son-in-law Jason Dunard; his grandchildren Michael Brodt, Lilly, Ally and William Robert Dunard; one brother Marvin (Kathy) Brodt; one sister Susan Goodman, niece Brianne Brodt, mother-in-law Mary Grace Mennemeyer; along with Vicki’s children: William Damron (Jessie), Michael Damron (Nicole), Greg Damron (Kaitlin), and their children Donovan, Rhia, Arianna, Parker and James; brothers- in-law, sisters-in-law, nieces, nephews and was blessed with an abundance of close friends. In 2001 Bob lost his first son Michael Brodt, and in 2014 he lost his second son Joseph Brodt. He was preceded in death by his father Robert Brodt, his brother David and father-in-law Lifard Mennemeyer. Big Bob was a man of great stature and greater personality. Bob was a gentle giant, many described as a big teddy bear who gave the best hugs. He was well known as an honest, generous, hard-working man, who would never give up no matter what was dealt his way. He will be remembered for his infectious smile, the Brodt laugh, his embracing bear hugs, “gentle giant” pat on the back, deep distinctive voice, and his incredibly loving personality. He will be missed deeply by those who knew and loved him. Family and friends will be received from 2:00 p.m. to 8:00 p.m. on Friday, June 19, 2020 at KEMPER-MILLARD-KEIM Family Funeral Chapel located at 351 Monroe Street Troy, MO 63379. Funeral service will be held at 12:00 p.m. on Saturday, June 20, 2020 at Knights of Columbus Hall Troy located at 500 Hwy J Troy, MO 63379. Officiating the service will be Dennis Carver. Interment will be held at the Troy City Cemetery with full military honors. In lieu of flowers expressions of sympathy may be made to the Bob Brodt’s Pitch for Life, in care of Kemper-Millard-Keim Family Funeral Chapel P.O. Box 222 Troy, MO 63379. Arrangements are under the direction of Kemper-Millard-Keim Family Funeral Chapel; 351 Monroe Street, Troy, Missouri 63379. Online condolences may be made at www.kempermillardkeimfamilyfuneralchapel.com Phone 636-528-8221

The family of Robert "Bob" P. Brodt Jr. created this Life Tributes page to make it easy to share your memories.

Send flowers to the Brodt family.