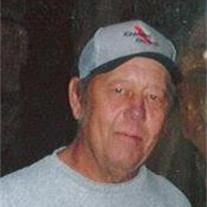 Robert “Bob” Wayne Ingram, Sr., 59, of Hawk Point, Missouri, passed away on Tuesday, April 2, 2013 at St. Joseph West Hospital in Lake Saint Louis. He was born June 10, 1953 in St. Charles, Missouri, a son of B.F. and Catherine (Pugh) Ingram. Bob was united in marriage to Diane Duff on May, 18, 1974 at the St, Mary’s Catholic Church. To this union three children were born. Bob attended Troy Buchanan High and was employed for SAF Holland for 38 years, as a shipping and receiving clerk. He was a charter member of the Hawk Point VFW Men’s Auxiliary and volunteered at the Hawk Point Volunteer Fire Department. He enjoyed golfing, hunting, fishing and was a very loving, caring and compassionate husband and father. Bob’s family was his everything and he will be deeply missed. He is survived by his wife of 38 years: Diane Ingram of Hawk Point, Missouri; children: Robert “Robbie” Ingram, Jr. of Hawk Point, Missouri, Karen Holmes and husband, Andrew of Truxton, Missouri and Rickie Ingram of Hawk Point, Missouri; four sisters: Joyce McFadden of Kansas, Joann McFadden and husband, Lonnie of Defiance, Missouri, Linda Layman and husband, Tom of Kansas, Debbie Miles and husband, Stuart of Kansas; four grandchildren: Mark, Kileigh, Alyssa and Alyvia Holmes; nieces, nephews and many friends. He was preceded in death by his parents, one step-daughter, Gail Duff in 1995 and one brother-in-law, Gene McFadden. Friends will be received from 4:00 p.m. to 8:00 p.m. on Monday, April 8, 2013 at KEMPER-MARSH-MILLARD Family Funeral Home / Hawk Point Chapel, 41 Farm Lane Hawk Point, MO 63349. Funeral services will be held at 11:00 a.m. on April 9, 2013 at Kemper-Marsh-Millard Family Funeral Home/ Hawk Point Chapel. Officiating the service will be Rick Ingersoll. Interment will be held at Hawk Point City Cemetery. Expressions of sympathy may be made to the Lincoln County Relay For Life. Arrangements are under the direction of Kemper-Marsh-Millard Family Funeral Chapel; P. O. Box 222, Troy MO. Online condolences may be made at www.kempermarshmillardfamilychapels.com Ph.(636) 338-4375

The family of Robert Ingram, created this Life Tributes page to make it easy to share your memories.

Send flowers to the Ingram, family.