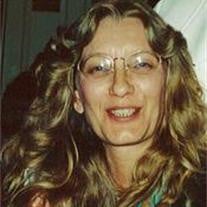 Robin Sue Yates, 55, of Moscow Mills, Missouri, passed away on November 30, 2012 at her residence in Moscow Mills, Missouri. She was born November 29, 1957 in St, Louis, Missouri a daughter of the late Bobby Dalton and Evalena (Tucker) Frey. She was united in marriage to Donnie Yates, Sr. on December 3, 1975 in Clayton, Missouri. Robin attended school in Pattonville, Missouri. She was employed at Wal-Mart in Troy, Missouri and True Manufacturing in O’Fallon, Missouri. Robin had an immense love for her children and grandchildren and was always entertaining her friends and family. She is survived by her loving husband of 36 years, Donnie L. Yates, Sr. of Moscow Mills, Missouri; children, Angie Summerton and husband, William of Winfield, Missouri, Travis Yates of Moscow Mills, Missouri and Donnie Yates, Jr. of Moscow Mills, Missouri; one sister, Timi Pollard and husband, Brent of Troy, Missouri, 7 grandchildren, Chelsea Summerton, Shannon Summerton, Coren Bradshaw, Haley Summerton, Peyton Yates, Cain Frey and Jayden Yates; and one great-grandchild, Jordyn Dallas. She was preceded in death by her parents and one son, Lucas W. Frey, June 27, 2012. Friends will be received from 5:00 p.m. to 7:00 p.m. on Thursday, December 6, 2012 at KEMPER-MARSH-MILLARD Family Funeral Home / TROY CHAPEL. Funeral services will be held at 7:00 p.m. on Thursday, December 6, 2012 at the Chapel. Expressions of sympathy may be made to The Family Of Robin Yates. Arrangements under the direction of Kemper-Marsh-Millard Family Funeral Home, P. O. Box 222, Troy, MO 63379 Online condolences may be made at www.kempermarshmillardfamilychapels.com Phone: 636-528-8221

The family of Robin Yates created this Life Tributes page to make it easy to share your memories.

Robin Sue Yates, 55, of Moscow Mills, Missouri, passed away on...

Send flowers to the Yates family.