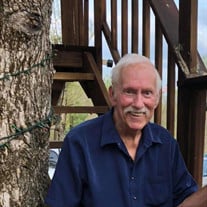 Rodney “Rod” Archie Zenk, 82, of Foley, Missouri, passed away on Friday, December 25, 2020 in Foley, Missouri. Rod was born on September 14, 1938 in Lemmon, South Dakota, a son of the late Andrew and Myril (Courtney) Zenk. He was united in marriage to Kaye Courtney on May 27, 1983 in Los Angeles, California. Rod graduated from Wilmot High School in 1956 and continued his education at South Dakota State College where he obtained a Bachelor’s Degree in fish and wildlife. He served his country in the United States Army as an Airborne Ranger where he was honorably discharged, he was commissioned a second lieutenant in the U.S. Army. After he was discharged as major in 1971, he helped build the first Job Corps facility in the United States located in Missouri. He worked for the U.S. Food and Drug Administration for over 24 years as a compliance officer/investigator. He later owned and operated Zenk Painting. Rod was a member of the Calvary Church in Minnesota. He could build about anything and enjoyed horseback riding. Rod loved the time he spent with his wife Kaye, traveling and living in the Black Hills of SD. He took great pride in spoiling his grandchildren and great-grandchildren and the memories made with his family. Rod was a friend to many. Even with all the set backs Rod faced in life, he was positive and would proudly wear his Airborne Ranger cap. He is survived by wife, Kaye Zenk of Foley, MO; one daughter, Stacee Lange (Jared) of Foley, MO; two bonus daughters: Debbie Rommel (Mike) of Orange, CA and Denise Knox (Dennis) of Foley, MO; grandchildren: Ashley Zenk (Kyle Conoyer) of Winfield, MO and David Fry of Foley, MO; bonus grandchildren: Chris Rommel, Doug Rommel (Kendra), Mark Rommel (Jenna) and Steven Rommel (Cathy) and Sabra Suchland (Mark); great-grandchildren: Hailey Zenk, Matty Keay and Marlee Keay; numerous bonus great-grandchildren, sisters-in-law: Sonya Zenk, Betty Zenk and Pat Negaard; many many friends. He was preceded in death by his parents, three siblings: Paula, Perry and Bruce, one bonus grandson, Matt Knox, brothers-in-law: Jim Negaard and Dan Schafer, sister-in-law, Connie Schafer and nephew, Bruce Frankowski. Services will be held at a later date. Expressions of sympathy may be made to The Family of Rodney Archie Zenk in care of Kemper-Millard-Keim Family Funeral Chapel P.O. Box 222 Troy, MO 63379. Arrangements are under the direction of Kemper-Millard-Keim Family Funeral Chapel; 351 Monroe Street, Troy, Missouri 63379. Online condolences may be made at www.kempermillardkeimfamilyfuneralchapel.com Phone 636-528-8221

The family of Rodney "Rod" Archie Zenk created this Life Tributes page to make it easy to share your memories.

Send flowers to the Zenk family.