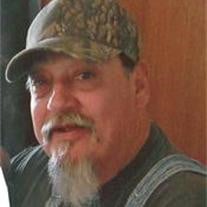 Ronald “Ron” Hembree, 57, of Troy, Missouri passed away on Friday, April 12, 2013 in Hawk Point, Missouri. He was born on May 13, 1955 in San Jose, California, a son of Ralo and Julie (Cordova) Hembree. He was united in marriage to Barbara Bratz on July 7, 1991 in St. Peters, Missouri. Ron was a carpenter for many years and enjoyed deer hunting, fishing and listening to a variety of music as long as it was loud. He was a motorcycle enthusiast and loved riding Harley Motorcycles. Ron was a very happy, outgoing, generous natured man, with a contagious smile and all around good guy. He never knew a stranger and was a friend to all. Ron loved spending time with his family and was a very loving, caring, son, husband, father, grandfather, brother and uncle. He is survived by his loving spouse, Barbara Hembree of Hawk Point, Missouri; children, Wendy Graham (Mike) of York Town, Virginia, Matt Hembree (Ginger) of Bowling Green, Missouri, Mark Brinker of Hawk Point, Missouri, Adam Brinker of Hawk Point, Missouri and Katie Rudd (Mike) of Richmond, Virginia; mother, Julie Scarpinatto (Joseph) of St. Peters, Missouri; siblings, Carol Reeh (Ronnie) of Fredericksburg, Texas, Robert Hembree (Barbara) of O’Fallon, Missouri and Mindy Scarpinatto of St. Peters, Missouri; eleven grandchildren, Damien, Tabitha, Austin, Jaden, Nesta, Domonic, Haileigh, Kenna, Matthew, Madelyn and Zachary, nieces, nephews and many friends. He was preceded in death by his father, Ralo Hembree on November 25, 1989. Family and Friends will be received from 3:00 p.m. to 5:00 p.m. on Tuesday, April 16, 2013 at KEMPER-MARSH-MILLARD Family Funeral Home / Hawk Point Chapel (41 Farm Lane Hawk Point, MO 63349). Funeral services will be held at 5:00 p.m. on Tuesday, April 16, 2013 at the Chapel. Honorary Pallbearers, Timmy Thompson, Matt McAtee, Bobby Eveland and Bill Sands. In lieu of flowers expressions of sympathy may be made to The Family Of Ron Hembree. In care of Kemper-Marsh-Millard Family Funeral Chapel; P.O. Box 222, Troy, MO 63379. Online condolences may be made at www.kempermarshmillardfamilychapels.com Ph.(636) 338.4375

Ronald “Ron” Hembree, 57, of Troy, Missouri passed away on Friday, April 12, 2013 in Hawk Point, Missouri. He was born on May 13, 1955 in San Jose, California, a son of Ralo and Julie (Cordova) Hembree. He was united in marriage to Barbara... View Obituary & Service Information

The family of Ron Hembree created this Life Tributes page to make it easy to share your memories.

Send flowers to the Hembree family.