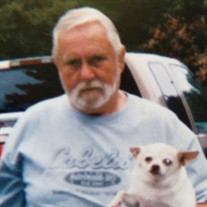 Ronald Eugene Gunter, Sr., 73, of Moscow Mills, Missouri, passed away on Saturday, February 27, 2021 at his residence in Moscow Mills, Missouri. He was born on April 12, 1947 in Washington, Missouri, a son of the late Carl and Flo Gunter. He was united in marriage to Nellie M Ephimer on February 12, 1971 in Alton, IL and she preceded him in death on April 1, 2016. To this union two sons and one daughter were born. Ronald graduated from Bethalto High School. He worked as a roofer for most of his life. He enjoyed fishing and camping at Rend Lake. He was always up for social hour at the Drinking Horn III in Moscow Mills, MO. He is survived by two sons and one daughter: Frank Drew and wife Pam of Bethalto, IL, Ginger Courto (Allen) of Wood River, IL and Ronald “Tyke” Gunter of Moscow Mills, MO; grandchildren: Ron Courto (Lisa) of Godfrey, IL, Brandon Drew of Bethalto, IL, Trisha Gowin (Tad) of Alton, IL and Mandy Drew of Bethalto, IL; great-grandchild: Cadence Marie Gowin of Alton, IL; nieces, nephews, cousins and friends. He was preceded in death by his parents, his wife, Nellie M. Gunter, one sister, Robin Beavers and one brother, Dave Gunter. A celebration of life will be held at a later date at the Drinking Horn III. Internment will be held at a later date a the Upper Alton Cemetery in IL. Expressions of sympathy may be made to Pets-Alone-Sanctuary in care of Kemper-Keim Family Funeral Chapel P.O. Box 222 Troy, MO 63379. Arrangements are under the direction of Kemper-Keim Family Funeral Chapel; 351 Monroe Street, Troy, Missouri 63379. Online condolences may be made at www.kemperkeimfamilyfuneralchapel.com Phone 636-528-8221

The family of Ronald Eugene Gunter Sr. created this Life Tributes page to make it easy to share your memories.

Send flowers to the Gunter family.