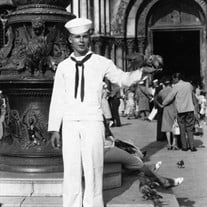 Ronald “Jake” Ivan Jacobson, 76, of Troy, Missouri, passed away on Saturday, March 5, 2016 at the Lincoln County Nursing and Rehab. He was born on October 25, 1939 in Hibbing, Minnesota, a son of the late Ivan and Mary Jacobson. Jake graduated high school and served in the United States Navy from June 28, 1968 until he was honorably discharged on March 30, 1970. He earned a business degree at the Antelope Valley College in Lancaster, CA. Jake was a Professional Truck Driver and retired in 1995 from the Los Angeles Sheriff’s Department after 25 years of service. In his earlier years he enjoyed skiing, fishing and going on road trips. He was a member of the Quartz Hill VFW Post 3000 in Quartz Hill, CA. Jake met the love of his life, Wanda in 2001 while living in CA, and some of their best memories were made when they would go dancing. After Jake retired he liked to share stories from the Navy, ride his motorcycle and read a good western story about the old west. He is survived by the love of his life, Wanda Goodin of Foley; one son, Ronnie Jacobson and wife, Melissa of Lancaster, CA; one sister and one brother: Mavis and Arnold; three grandchildren: Ronnie, Jacob and Melissa, three step-grandchildren: Brian, Eric and Summer; nieces, nephews, cousins and friends. He was preceded in death by his parents, one sister, Kathy and two brothers: David and Herb. Services will be held at a later date. Expressions of sympathy may be made to the Quartz Hill VFW Post 3000, in care of Kemper-Millard-Keim Family Funeral Chapels, P.O. Box 222 Troy, MO 63379. Arrangements are under the direction of Kemper-Millard-Keim Family Funeral Chapel; 351 Monroe Street, Troy, Missouri 63379. Online condolences may be made at www.kempermillardkeimfamilychapels.com Phone 636-528-8221

The family of Ronald "Jake" Ivan Jacobson created this Life Tributes page to make it easy to share your memories.

Send flowers to the Jacobson family.