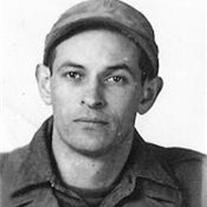 Roy William Phillips, 91, of Troy, Missouri passed away on Tuesday, July 9, 2013 at the Lincoln County Nursing and Rehab. He was born November 9, 1921 in Olney, Missouri, a son of the late Armpstead A. and Amanda B. (Hoss) Phillips. Roy was united in marriage to Claudine Ard, while he was stationed in the Army, on August 19, 1945 in Wadsworth, Kansas. Roy attended school through the eighth grade in Olney at a one room school house. He was drafted in the Army into the 79th Infantry on May 28, 1944 at Jefferson Barracks, Missouri. He served his country in WWII, as a rifleman and became a prisoner of war in Germany. Roy was assigned as a prison guard in Leavenworth, Kansas and after being liberated from the prison camp he was honorably discharge on November 22, 1945. Roy and Claudine lived at Olney, Missouri until 1950 when they moved to Troy, Missouri. In 1978 they moved to Hawk Point, Missouri and later moved back to Troy in January of 2007. Roy went to work for Mr. Fred Paulsmeyer, shucking corn, and then the Lincoln County Road District. He worked as a barber with Jimmy Moxley on Main Street in Troy, in 1951 at Farm Bureau as a laborer, then McDonnell Douglas as a Machinists for 8 years and then retired in 1982, after 20 years as a Rural Mail Carrier. He was a lifetime member of the Hawk Point VFW Post #7560 and Rural Mail Carrier Association. Roy enjoyed quail hunting, coon hunting, pitching horse shoes, which he was very good at and was an avid fisherman. He was a jokester and knew every good story there was to tell. He had the best gardens and will be deeply missed by those who knew and loved him. He is survived by his loving wife of 67 years, Claudine Phillips of Troy, Missouri; one son, Gary W. Phillips and wife, Bonnie of Greenwood, Missouri; one daughter-in-law, Tina Phillips of Troy, Missouri; six grandchildren, thirteen great-grandchildren, nieces, nephews and many friends. He was preceded in death by his son, Roger Dale Phillips on September 27, 2009. Friends will be received from 9:30 a.m. to 11:30 a.m. on Saturday, July 13, 2013 at KEMPER-MARSH-MILLARD Family Funeral Home / Troy Chapel. Funeral services will be held at 11:30 a.m. on Saturday, July 13, 2013 at the chapel. Interment will be held at Olney Cemetery with full military honors. Expressions of sympathy may be made to AmHeart Hospice or St. Jude Cancer Research. Arrangements are under the direction of Kemper-Marsh-Millard Family Funeral Chapel; P. O. Box 222, Troy MO. Online condolences may be made at www.kempermarshmillardfamilychapels.com Ph.(636) 528-8221

Roy William Phillips, 91, of Troy, Missouri passed away on Tuesday, July 9, 2013 at the Lincoln County Nursing and Rehab. He was born November 9, 1921 in Olney, Missouri, a son of the late Armpstead A. and Amanda B. (Hoss) Phillips. Roy was... View Obituary & Service Information

The family of Roy Phillips created this Life Tributes page to make it easy to share your memories.

Roy William Phillips, 91, of Troy, Missouri passed away on Tuesday,...

Send flowers to the Phillips family.