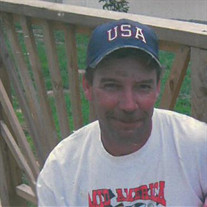 Royce Sheldon Rollings, Jr., 51, of Moscow Mills, Missouri, passed away on August 26, 2019 at his residence in Moscow Mills, Missouri. He was born on November 2, 1967 in St. Louis, Missouri and was the son of Royce S. and Linda (Pender) Rollings. Royce worked for the Warrenton Manor Nursing Home for many years. He was a mechanic and could fix anything. He loved being outdoors tinkering and was very creative. He valued the time he spent with his family especially his daughter Alissa. He is survived by his one daughter, Alissa Rollings of Winfield, MO; his mother, Linda Frey and husband Bill of St. Charles, MO; three siblings: Janet Payton of Owensboro, KY, Cheryl Rollings of Staunton, IL, and Chris Rollings of Florissant, MO; two step-daughters: Melinda Rayborn of Troy, MO and Miranda Rayborn of Troy, MO; step-sisters: Sondra, Kelley, nieces, nephews, cousins and many friends. He was preceded in death by his father, Royce Sheldon Rollings, Sr. Graveside service will be held at 2:30 p.m. on Friday, August 30, 2019 at the Ellington Memorial Cemetery. In lieu of flowers expressions of sympathy may be made to The Family of Royce Sheldon Rollings, Jr., in care of KEMPER-MILLARD-KEIM Family Funeral Chapel; P.O. Box 222, Troy, MO 63379. Online condolences may be made at www.kempermillardkeimfamilyfuneralchapel.com Ph.(636) 528-8221

The family of Royce Sheldon Rollings, Jr. created this Life Tributes page to make it easy to share your memories.

Send flowers to the Rollings, family.