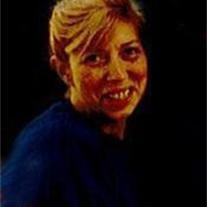 Sandra L. Hampp, 62, of Silex, Missouri, passed away Monday, August 13, 2012, at her home surrounded by her loving family. She was born November 8, 1949, a daughter of Lecil and Arillian (Woods) Dykes in Haleyville, Alabama. On August 5, 1969, she was united in marriage to Warren E. Hampp in Ferguson, Missouri. To this union, two children were born. Sandra attended Bermuda Elementary School in Ferguson and graduated from McClure High School in Florissant, Missouri, in 1968. She was employed at Hussman Refrigeration, Agri-Foods and most recently by Harper’s Metal Salvage where she was bookkeeper. One of her favorite activities was traveling with family and friends especially by motorcycle. Sandra was a self-educated expert on precious stones and spent a lot a time watching programs about them on TV. She especially enjoyed spending time with her grandchildren. She is survived by her loving husband, Warren of Silex, Missouri; one daughter, Danielle Hampp of Silex, Missouri; her mother, Arillian Dykes of Silex, Missouri; one sister, Phyllis (Lloyd) Harper of Silex, Missouri; one brother, Wade Dykes of Silex, Missouri; three grandchildren: Scott Hampp, John Boyd, Olivia Boyd all of Silex, Missouri; nieces, nephews and many friends. She was preceded in death by her father, Lecil and her son, Warren E. Hampp, Jr. Friends will be received from 11:00 a.m. to 3:00 p.m. on Friday, August 17, 2012, at KEMPER-MARSH-MILLARD Family Funeral Home / TROY CHAPEL. Funeral services will follow at 3:00 p.m. on Friday, August 17, 2012, at the Chapel. Burial will be in Brock Cemetery in Brilliant, Alabama. Expressions of sympathy may be made to The American Cancer Society, in care of Kemper-Marsh-Millard Funeral Home. Arrangements under the direction of Kemper-Marsh-Millard Family Funeral Home, P. O. Box 222, Troy, MO 63379. Online condolences may be made at www.kempermarshmillardfamilychapels.com Phone: 636-528-8221

The family of Sandra Hampp created this Life Tributes page to make it easy to share your memories.

Send flowers to the Hampp family.