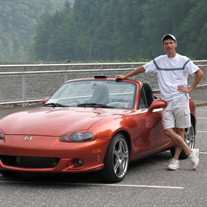 Scott Allen Rueweler, 47, of O’Fallon, Missouri, passed away on Tuesday, January 26, 2021 at his residence. He was born on December 9, 1973 in Troy, Missouri, the son of James E. and Elizabeth (Kunza) Rueweler. Scott was united in marriage to Heather Bresciano on October 6, 2012 in Forrest Park. Scott graduated from Troy Buchanan High School in 1992 and earned several certificates from Rankin Technical College. He worked as an Industrial Maintenance Mechanic at Tight Line Composites. Scott was a car enthusiast, who had a special place in his heart for his 2005 Mazdaspeed MX5 Miata. He met the love of his life on a Mazda trip in Colorado and the rest was history. Scott and Heather enjoyed the many scenic drives and adventures they took together. He was a Star Wars fan and liked cheering on the St. Louis Blues Hockey Team. Scott enjoyed the many hikes with his wife in Colorado. He was a loving, caring person and would do anything for anyone. Scott loved his family unconditionally and was a friend to many. He is survived by his loving wife, Heather Rueweler of O’Fallon, MO; mother, Elizabeth “Betty” Schlueter and husband Mark of Troy, MO; one sister, Jennifer Foster and husband Jay of Plano, TX; one nephew and one niece: Jacob and Leighton Foster; friends that became family: Vince Gabrunas, Denise Mahoney (John) and Jason and Michelle Kitson; aunts and uncles: Marge Schwendemann (Tom), Katy Fox, Bill Kunza (Cherry), Joseph Kunza (Mary Kay), Frank Kunza (Wynette), Larry Kunza (Sue), Betty Cox (Russell) and John Rueweler (Margie); one sister-in-law, Debra Cole of Las Vegas, NV; numerous cousins, relatives and many friends. He was preceded in death by his father, James E. Rueweler, grandparents: Frank and Frances Rueweler and Billy and Doris (Wehmeier) Kunza, one uncle, Jerry Rueweler and mother-in-law, Ann Reichtell. Family and friends will be received from 3:00 p.m. to 6:00 p.m. on Monday, February 1, 2021 at KEMPER-KEIM Family Funeral Chapel located at 351 Monroe Street Troy, MO 63379. Funeral service will be held at 6:00 p.m. on Monday at the Troy Chapel in Troy, MO. Officiating the service is Pastor Kelly Hardcastle. Expressions of sympathy may be made to The Family of Scott Allen Rueweler in care of Kemper- Keim Family Funeral Chapel P.O. Box 222 Troy, MO 63379. Arrangements are under the direction of Kemper- Keim Family Funeral Chapel; 351 Monroe Street, Troy, Missouri 63379. Online condolences may be made at www.kemperkeimfamilyfuneralchapel.com Phone 636-528-8221

Scott Allen Rueweler, 47, of O&#8217;Fallon, Missouri, passed away on Tuesday, January 26, 2021 at his residence. He was born on December 9, 1973 in Troy, Missouri, the son of James E. and Elizabeth (Kunza) Rueweler. Scott was united in marriage... View Obituary & Service Information

The family of Scott Allen Rueweler created this Life Tributes page to make it easy to share your memories.

Send flowers to the Rueweler family.