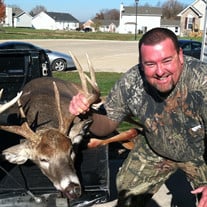 Shawn Christopher Burks, 41, of Winfield, Missouri passed away Thursday, May 18, 2017, at Mercy Lincoln in Troy, Missouri. He was born on August 14, 1975 in Dexter, Missouri, a son of Bobby Franklin and Wilhelma Johnson Burks. He married the love of his life Patricia Leach on May 29, 1999 in Lake St. Louis, Missouri. Shawn was educated in the Wright City school system. He was an avid outdoorsman who especially enjoyed deer and turkey hunting. His most prized possession was his bow. When Shawn and Patricia were married, the wedding was scheduled around deer season. He loved to go camping and his idea of relaxation was mowing the yard on his riding mower, listening to music and spending time with family and friends. Shawn is survived by his loving wife, Patricia of Winfield, Missouri; three sons: Jason Stufflebean, Jr., Tyler Leach, and Jacob Burks all of Winfield, Missouri; mother: Wilhelma Burks, of Wentzville, Missouri; siblings: Bobby Burks (Debbie) of Portageville, Missouri, Angela Randla (Chris) of Collinsville, Illinois; mother-in-law: Colleen Leach of Toledo, Ohio; father-in-law: Roy Leach (Alma Jean) of Harrogate, Tennessee; brothers-in-law: Roy E. Leach (Paula) of Lambertville, Michigan, William “Ritch” Leach (Lisa) of Savannah, Georgia, Joseph Leach (Cathy) of Leesburg, Virginia, Eddie Callahan of Louisiana, Missouri; many aunts, uncles, nieces and nephews. He was preceded in death by his father: Bobby Franklin Burks; two brothers: Scott Burks and Teddy Rogers; and one sister: Sheila Callahan. Visitation will be held Tuesday, May 23, from 3:00 p.m. to 7:00 p.m. at KEMPER-MILLARD-KEIM Family Funeral Chapel in Troy, Missouri. A service of remembrance will follow at 7:00 p.m. In lieu of flowers, expressions of sympathy may be made to the family of Shawn Burks or the American Heart Association in care of KEMPER-MILLARD-KEIM Family Funeral Chapel, P.O. Box 222 Troy, MO 63379. Arrangements are under the direction of KEMPER-MILLARD-KEIM Family Funeral Chapel; 351 Monroe Street Troy, MO 63379. Online condolences may be made at www.kempermillardkeimfamilyfuneralchapel.com Phone 636-528-8221

Shawn Christopher Burks, 41, of Winfield, Missouri passed away Thursday, May 18, 2017, at Mercy Lincoln in Troy, Missouri. He was born on August 14, 1975 in Dexter, Missouri, a son of Bobby Franklin and Wilhelma Johnson Burks. He married the... View Obituary & Service Information

The family of Shawn Christopher Burks created this Life Tributes page to make it easy to share your memories.

Send flowers to the Burks family.