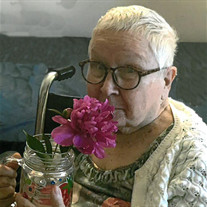 Shirley Ann Neisinger, 84, of Winfield, Missouri, passed away peacefully on Friday, August 17, 2018 at The Estates of Spanish Lake in St. Louis, Missouri. She was born on June 21, 1934 in Menomonie, Wisconsin a daughter of the late Ole and Esther (Hendrickson) Koolmo. Shirley married her soulmate, Larry Neisinger on October 3, 1952 in St. Louis, Missouri and to this union five children were born. Shirley was one of fifteen children that grew up on a dairy farm in Wisconsin. Every morning before school she would milk the cows on the family farm. She worked her way through high school at the White Front Café. She met her soulmate, purchased their first home in Village of Riverview in 1972 and they later moved to Winfield in 2002. Shirley was an active member of Kingdom Hall of Jehovah’s Witness in Troy, Missouri. She enjoyed sewing, spoiling her grandchildren, and collecting tea cups. Shirley was a loving, caring and generous person, who would always help those in need. She was a funny lady, that always saw things on the lighter side. Her contagious smile and soft hymns will be deeply missed. She is survived by her loving husband of 65 years, Larry Neisinger of Winfield, MO; one son and two daughters: Dale Neisinger and wife Lourdes of Overland, MO; Doreen Gould and husband Tom of Ferguson, MO; and Wanda Herbst and husband Jim of St. Charles, MO, and one daughter-in-law, Colleen Neisinger of Foley, MO; five sisters: Eileen, Jeanette, Marvel, Lucille and Karen; seventeen grandchildren; sixteen great-grandchildren; sisters-in-law, brothers-in-law, nieces, nephews, cousins and many friends. She was proceeded in death by her parents, two sons: Barry Neisinger on November 18, 2015 and Tony Neisinger on April 16, 2018, three sisters, four brothers, two infant siblings. Services will be held private for the family. Expressions of sympathy may be made to the Estate of Spanish Lake in care of KEMPER-MILLARD-KEIM Family Funeral Chapel, P.O. Box 222 Troy, MO 63379. Arrangements are under the direction of KEMPER-MILLARD-KEIM Family Funeral Chapel; 351 Monroe Street Troy, MO 63379. Online condolences may be made at www.kempermillardkeimfamilyfuneralchapel.com Phone 636-528-8221

Shirley Ann Neisinger, 84, of Winfield, Missouri, passed away peacefully on Friday, August 17, 2018 at The Estates of Spanish Lake in St. Louis, Missouri. She was born on June 21, 1934 in Menomonie, Wisconsin a daughter of the late Ole and Esther... View Obituary & Service Information

The family of Shirley Ann Neisinger created this Life Tributes page to make it easy to share your memories.

Send flowers to the Neisinger family.