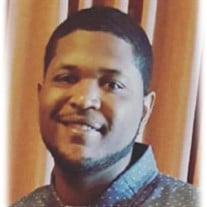 Stanley Marquan Jennings, adoringly known as ‘Stump” and ‘Pooh-Man,’ was born on July 16, 1988 in St. Louis, Missouri to the late Floyd Jennings and Mellony Sylvester. Stanley graduated High School in 2008 and worked on the Assembly Line at Ford Motor Company in Chicago at the same plant as his mother, Mellony. Stanly confessed his belief in God and accepted Christ as his Lord and Savior at an early age; he was a true child of God. He was highly favored and loved so much that he was called home early on Friday, March 31, 2017 at the age of 28. He was a sports enthusiast; he enjoyed football, basketball and baseball. He very rarely missed a game and enjoyed rooting on the Chicago Bears Football Team and the St. Louis Cardinals. He was a kind hearted young gentleman, who looked forward to his nightly phone calls with his grandmother, JoAnne. His family was his life, his priority, especially when they came to visit. He made sure a good time was had by all and loved being the planner of all the events; making their visit is most memorable ones. The many thoughts of him will be forever remembered. His contagious smile and always helping others will live throughout all for a lifetime. Stump lived his years displaying his versatile ability to love his family; exclusively and unconditionally loving his mom and grandma, as they were his backbone; nurturing and molding into the man he had grown to become. Stanley left a legacy for his younger generation of family that throughout all of his lifes obstacles, LOVE conquers all. Stump loved his aunt Bonnie for her nurturing and understanding, she was his confidant throughout life challenges. Stanley’s love for his younger brother, “Lump” was unimaginable. He loved him unconditionally and profoundly showed him in more ways than one, how he was his world. He loved him so much that even when his brother would beat him in ‘Madden,’ he would give him the hugest smile and reply “Run that back again!” He is survived by his loving mother, Mellony Sylvester of Merrillville, IN; two brothers: Darnell Robinson of Merrillville, IN and Keon King of St. Louis, MO; his four legged sister, “Missy”; his significant other, Vanessa Ramos of Merrillville, IN; maternal grandparents: JoAnne Smith, Donald Travis; paternal grandparents: Mr. and Mrs. Jay Jennings; two aunts: Sharron “Bonnie” Banks and Vanessa Carrol; uncles: Terrance Travis (Kari), Donnie Bradfield and Jay Jennings; god parents: Kurt Massey and Helen Smith; numerous cousins, one near and dear to his heart: Weldon Smith; relatives and many friends. He was preceded in death by his father, Floyd Jennings, maternal grandfather, Stanley Banks and one uncle, Carols Travis. Friends will be received from 9:00 a.m. to 11:00 a.m. on Monday, April 10, 2017 at the Believers Temple Word Fellowship, located at 2115 Chambers Road, St. Louis, MO 63136. Funeral service will be held at 11:00 a.m. on Monday at the Believers Temple Word Fellowship in St. Louis, MO. Officiating the service will be Bishop Calvin Scott. Interment will be held at the St. Peter’s Cemetery in St. Louis, Missouri. In lieu of flowers expressions of sympathy may be made to the American Heart Association in care of Kemper-Millard-Keim Family Funeral Chapel P.O. Box 222 Troy, MO 63379. Arrangements under the care of KEMPER-MILLARD-KEIM Family Funeral Chapel 351 Monroe Street, Troy, MO 63379. Online condolences may be made atwww.kempermillardkeimfamilyfuneralchapel.com Phone (636) 528-8221

The family of Stanley Marquan Jennings created this Life Tributes page to make it easy to share your memories.

Send flowers to the Jennings family.