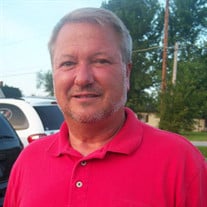 Steve Emert passed away after a brief illness on November 20, 2019, at the age of 67. Steve was born January 9, 1952. Growing up, he worked a variety of jobs, but finally landed at Troy Flower Shop in 1967, where he worked for Joe and Laverne Primeau. He married Carla (Throgmorton) on December 30, 1972. Steve and Carla bought the flower shop from the Primeaus in 1975 and two years later, they had their only child, Andrea. For almost 45 years, until his passing, Steve and Carla worked side by side at Troy Flower Shop. Steve was a talented floral designer and valued his customers. He was proud of his business and the Troy community. Steve was a pretty simple man: he enjoyed his Bud Light, watching Mizzou (and complaining about them whether they were winning or losing), riding horses, and swimming in his pool. He was happiest when he was around his family; especially when he was with his beloved grandson, Colin. Steve will be sadly missed by those who knew him. He is survived by his wife of nearly 47 years, Carla, his daughter, Andrea, son-in-law, Ryan, and the light of his life, Colin. He is further survived by his brothers, sisters, brothers-in-law, sisters-in-law, nieces, nephews, and countless friends. During his last days, he was greatly comforted by his brother, Dick Emert, his brother-in-law and sister-in-law, John and Melissa Throgmorton, and his friend, Harvey Rhoads. The family asks that you join them, Saturday, December 14, 2019, from 8:00 am to 12:00 pm at Troy Flower Shop, for “Steve Day”. For nearly 25 years, Monday through Saturday, Steve would put two names on the sign in front of the flower shop, and those recipients would receive a free rose. We will honor him with his name on the sign, and everyone who stops by will receive a rose in remembrance of Steve. If you would prefer to leave a memorial, you may do so in his name to Christian Brothers College (CBC) High School, in care of KEMPER-MILLARD-KEIM Family Funeral Chapel P.O. Box 222 Troy, MO 63379. Arrangements are under the direction of Kemper-Millard-Keim Family Funeral Chapel; 351 Monroe Street, Troy, Missouri 63379. Online condolences may be made at www.kempermillardkeimfamilyfuneralchapel.com Phone 636-528-8221

Steve Emert passed away after a brief illness on November 20, 2019, at the age of 67. Steve was born January 9, 1952. Growing up, he worked a variety of jobs, but finally landed at Troy Flower Shop in 1967, where he worked for Joe and Laverne... View Obituary & Service Information

The family of Steve Emert created this Life Tributes page to make it easy to share your memories.

Steve Emert passed away after a brief illness on November 20,...

Send flowers to the Emert family.