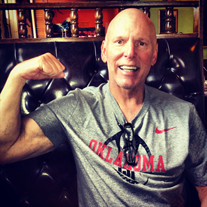 Steven Lee Hunter, 60, of Truxton, Missouri was born into eternity early Friday morning, May 9, 2014 at their family farm near Truxton, Missouri. He was born on this earth on October 3, 1953 in Alton, Illinois, the son of the late Sam and Harriet (Wetstein) Hunter. He was united in marriage to Bobbi Jo Stinson, on August 8, 1981. They have two sons and one daughter. Mr. Hunter received his Masters in Health Care Administration and in his earlier years he taught college classes at Webster University. He was CEO for several health care systems including, St. Anthony’s Hospital & SSM Healthcare of Oklahoma, Covenant Health System in Lubbock, Texas and Provena Healthcare in Chicago, Illinois. He was one of the vital developers of the Oklahoma City 10 year strategic plan for the inner city. Mr. Hunter was Chairman & Co-Owner of Assisted Care at Home in Phoenix, Arizona. Mr. Hunter enjoyed maintaining the lawn at the family farm in Truxton, Missouri, traveling to various places with his family, boating and lifting weights, which he received his nickname as “Hog Man.” He is survived by his one daughter, Victoria Elizabeth Hunter and her fiancé, Jason Nash of Phoenix, Arizona; two sons, Ryan Hunter and wife, Tonya of Hazelwood, Missouri and Jeff Hunter and wife, Shana of Choctaw, Oklahoma; two grandchildren, Dylan Hunter and Hudson Hunter; his brothers, Kevin Hunter and his wife, Tija of East Alton, Illinois and Mike Hunter and wife, Leesa of Woodriver, Illinois; his father-in-law and mother-in-law, Joe Robert and Wanda Stinson of Hazelwood, Missouri and his sister-in-law, Regina Harrell and her husband, Leonard of Houston, Texas. He was preceded in death by his parents and the love of his life, Bobbi Jo Hunter on August 8, 2013. A celebration of his life will be held at 3:00 p.m. on Monday, May 12, 2014 at the family farm at 596 Truxton Church Road in Truxton, Missouri. In lieu of contributions or flowers, Steven would like for you to send flowers to someone you love in memory of him. Arrangements are under the direction of KEMPER-MARSH-MILLARD Family Funeral Chapels, 41 Farm Lane, Hawk Point, Missouri; (636) 338-4375. Condolences may be made to the family online at www.kempermarshmillardfamilychapels.com

Steven Lee Hunter, 60, of Truxton, Missouri was born into eternity early Friday morning, May 9, 2014 at their family farm near Truxton, Missouri. He was born on this earth on October 3, 1953 in Alton, Illinois, the son of the late Sam and Harriet... View Obituary & Service Information

The family of Mr. Steven Lee Hunter created this Life Tributes page to make it easy to share your memories.

Steven Lee Hunter, 60, of Truxton, Missouri was born into eternity...

Send flowers to the Hunter family.