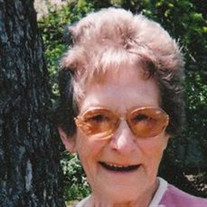 Sybil Maxine Creech, 91, of Troy, passed away on Monday, June 16, 2014 at Lincoln County Nursing and Rehab in Troy, Missouri. She was born on July 27, 1922 in Olney, Missouri, a daughter of the late Joseph and Mazie (Ward) Stotler. Sybil was united in marriage to Henry “Jack” Clay Creech on March 15, 1942, in Olney, Missouri and he preceded her in death on January 31, 1993. To this union five sons and three daughters were born. She worked for several years at the Heel Factory and the Herleo Factory in Troy, MO. All of this was done while being a farmer’s wife and raising eight children. Sybil enjoyed gardening, tending her flower garden and watching hummingbirds. She will forever be remembered for her Sunday fried chicken and pies. Sybil was a member of the Old Alexandria Church where she enjoyed helping to cook. Her top priority in life was her family and what meant even more was the time they spent together. She is survived by her children: Robert “Sonny” Creech and wife Linda of St. Ann, MO, Brenda Schulte and husband Allen of Old Monroe, MO, Ellen Wright and husband Tim of Wentzville, MO, Jackie Brewer and husband Walt of St. Charles, MO, Wendell Creech and wife Carol of Midland, TX, Clay “Willie” Creech and wife Karla of Troy, MO, Brett Creech and wife Tracey of Moscow Mills, MO and Mark Creech of Troy, MO; sibling, Georgia Barton and husband Richard of College Park, MD, Gail Leonard and husband Ralph, Lowell Meier and wife Johnnie, Neoma Duval and Marion Meier and wife Shirley; eighteen grandchildren, thirty-six great-grandchildren, seven great-great-grandchildren, nieces, nephews, cousins and friends. She was preceded in death by her husband Jack, her father Joseph on December 10, 1966, her mother Mazie on December 7, 1933, step-mother Vanetta Stotler, siblings Jewel Groh, Cargie Schieble, Forrine Moore, Charles “Chuck” Stotler and Joseph “Bill” Stotler. Friends will be received from 4:00 p.m. to 7:00 p.m. on Saturday, June 21, 2014 at KEMPER-MARSH-MILLARD FAMILY FUNERAL HOME/ TROY CHAPEL. Celebration of life will be held at 7:00 p.m. on Saturday, June 21, 2014 at KEMPER-MARSH-MILLARD FAMILY FUNERAL HOME/ TROY CHAPEL. Interment will be held at a later date at Old Alexandria Cemetery. Expressions of sympathy may be made to Lincoln County Relay for Life or Old Alexandria Cemetery. In care of Kemper-Marsh-Millard Family Funeral Chapel; P.O. Box 222, Troy, MO 63379. Online condolences may be made at www.kempermarshmillardfamilychapels.com Ph.(636) 528-8221

Sybil Maxine Creech, 91, of Troy, passed away on Monday, June 16, 2014 at Lincoln County Nursing and Rehab in Troy, Missouri. She was born on July 27, 1922 in Olney, Missouri, a daughter of the late Joseph and Mazie (Ward) Stotler. Sybil was... View Obituary & Service Information

The family of Sybil Maxine Creech created this Life Tributes page to make it easy to share your memories.

Sybil Maxine Creech, 91, of Troy, passed away on Monday, June...

Send flowers to the Creech family.