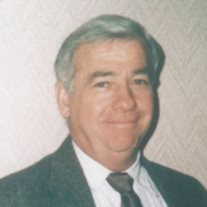 Thomas Andrew Adkins, 74 of Troy, Missouri, passed away Thursday, April 3, 2014 at Parklane Care and Rehabilitation Center in Wentzville, Missouri. He is the son of the late Paul and Edith (Jacob) Adkins, he was born July 1, 1939 in Carter County,... View Obituary & Service Information

The family of Thomas A. Adkins created this Life Tributes page to make it easy to share your memories.

Send flowers to the Adkins family.